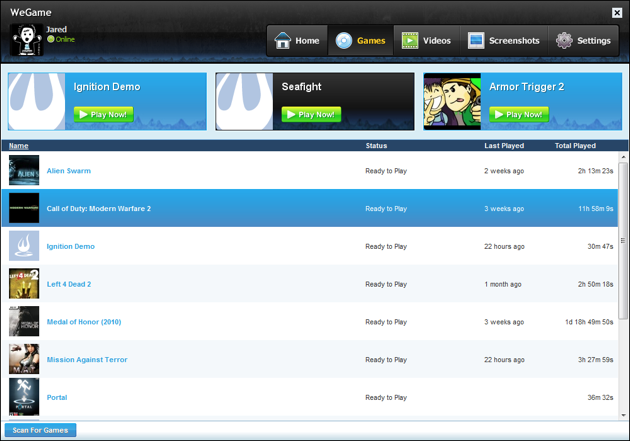 Back in the old days — say, 2004 or so — the only way to get computer games was from retail outlets. Then Valve’s digital distribution platform Steam came along, allowing gamers to pay for and immediately download games from both Valve and major third parties (it’s a little like Apple’s App Store). And it’s done very well — Steam now has over 70% of the digital game distribution market, and some retail stores have gone as far as banning games that install Steam because it’s eating up so much of their business.

WeGame, a 4-man startup that’s been around since 2007, wants in on the action. Up until now the company has been primarily focused on building software that lets gamers record and share their in-game exploits using screenshot and video capture tools. And now it’s also launching a digital distribution store that will let gamers pay for and install games, in much the same way they would using Steam. If you want to try it out, you can sign up for the private beta right here.

So why would anyone use WeGame instead of Steam? Founder Jared Kim says that the current situation — where Value controls so much of the digital distribution market — is bad for developers. Valve gets a cut of each sale (even when it’s selling competitors’ games) and also manages which games get featured in the store. Kim says that WeGame will be a better deal for developers (it will take a smaller cut than Steam) and because it’s a third party that doesn’t make games of its own, developers won’t have to worry about handing over money to a competitor.

So far, WeGame has partnerships with Shanda/MochiMedia (who will offer 250 browser-based games), Bigpoint, Perfect World, Subagames, and CMUNE. Down the line it hopes to be distributing AAA titles like Trion World’s forthcoming game Rift.

For now, all of the games being distributed through WeGame are free to play — WeGame is doing revenue share and CPA deals with game publishers to monetize these games. Down the line, it will also introduce transactions, so gamers can purchase software the way they do on Steam.

Of course, in order for the marketplace to be attractive for developers, it needs users. WeGame currently has 1.7 million registered users and 1 million installs of its desktop client; around half of these users are active — nothing to scoff at, but a far cry from Valve’s 30 million users on steam.

WeGame has a long road ahead of it. Kim sounds confident that it will be able to line up quality games (he says publishers are eager to have popular options other than Steam), but it’ll need to give gamers a compelling reason to make the switch, too. And at this point I don’t think the integrated screen capture software will offer a very strong incentive.