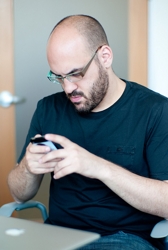 Our very own MG Siegler interviewed Jason Goldman, VP of Product at Twitter, at Le Web 10.

Siegler started off by asking about the new integrations Twitter launched yesterday.

Goldman went over the enhancements, which include integrations in the details plane of #newtwitter with Instagram, YouTube, iTunes, and other services.

It’s not wide open, we take a measured approach. In the future, it will be a new place for innovations to happen, though.

Yes, and we’re ramping up. We’re hiring more people, so we have room for growth there.

You’ve moved into some of the holes that third-party developers were focused on filling. Aren’t you afraid that you’re scaring them?

We want to give users the best possible experience, on mobile and the Web. We need to improve all of them. But I still use TweetDeck and Seesmic, so there are still opportunities. We’re also adding new opportunities for third-party devs to make money from their applications. There’s a lot of interesting innovations in relevance, for one.

I think it’s also a result of Twitter and the service in general growing so quickly. The majority of our resources are still going to scaling the platform, but we can now build our own clients.

What would you say is the biggest product mistake you made?

Any of the UI I designed myself. Biz Stone told me that a lot of times.

Sometimes, we make stuff too complicated. Take the IM feature we once incorporated, that would recognize when you were actually online – it was a clever idea, but it just didn’t work, it was far too complicated and people got confused.

We try not to get too clever in terms of features, not add too many options.

You worked at Google for a while. What’s your view on what they’re doing with social? How do you think they’re doing?

Some stuff has leaked out, but I don’t think it’s fair to judge any products at this point.

We need to wait and see what they actually launch. There’s amazing folks at Google, and they will build innovative stuff.

Why hasn’t its social stuff caught on yet?

Their primary business is still online advertising, so it’s hard to prioritize. Google’s actually great at it, but it’s still difficult, especially because it’s such a large company.

What’s next for Twitter? What does it need to do better?

Focus on consumption experience. We have some content for everyone, but we can do a far better job at allowing people to find it quicker. Some of the stuff of ‘who to follow’ is a first step, but there’s more work on that level to be done.

You’ve been with Twitter for a while. So what’s next for you personally?

Yeah I date back to the Odeo days. But I wanted to call it ‘fleeding’, which was a terrible idea. I started in product management, but I had several different roles.

I’ve just announced to the entire company last Friday that I’ll be leaving Twitter at the end of the month.

We’ve grown a lot over the past few years, but it’s a good time for me to step down, although I’ll still be involved as an advisor for a while. I’m not leaving to start something new, and I’m not going to join Facebook or Google.

I’m not going to say I need to spend more time with my family – as it only consists of my girlfriend and two cats – but I just need a bit of a break.

What are you most proud of?

The New Twitter was certainly one of the most complicated, but hiring Kevin Cheng to lead the project was probably the most important thing I did at Twitter.

I’m also proud of the little things, like updating the status blogs over the years. Learned the many ways of how to say “we’re working on it” and so on.