Last spring, we did a preview post on Offermatic, a new deals site that we described as the “freak love child Of Mint, Groupon and Blippy”. Seven months later, that’s still pretty accurate. And now you’ve got a chance to try it out for yourself: Offermatic has launched to the public. The company is also announcing that it’s closed a $750,000 seed round with participation from Kleiner Perkins, Bessemer, and angel investors.

Offermatic revolves around getting good deals at local merchants and from national chains, but it isn’t just another deals site — there aren’t any printed vouchers, and you never have to show a cashier a coupon. Instead, you link up your credit or debit card to the service, which then automatically analyzes your purchases and offers you deals based on your shopping history.

It’s a very interesting model, because it means that Offermatic can offer highly targeted deals based on the sort of things you are actually buying. Seeing a lot of movies lately? Offermatic might send you 50% off on tickets from Fandango. Just did some shopping at the Home Depot? They might send you a discount— or a competitor like Lowes can pay to send you an offer and try to nab a customer from a rival. 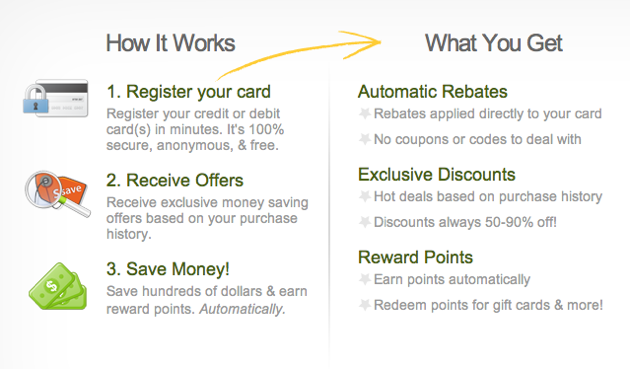 To help mitigate the creepiness factor associated with analyzing your credit card information, Offermatic has turned to Yodlee, the same financial service backend that powers Mint. The site says that it keeps all of your data synonymized, so while it does know your shopping history, it doesn’t (in theory) know who you are. And none of your shopping history is ever shared — this isn’t a social site.

Once you’ve signed up for the service, using it is pretty simple. Offermatic will periodically email you offers based on your recent transactions. If you spot one you like, you click a link, and your credit card will then have that offer automatically ‘loaded’ on top of it. Then, when you make a purchase at whatever merchant or brand made the offer, your discount will automatically be applied to the transaction. There’s still a very small amount of user effort involved (you have to click on the emails for the offers you’re interested in), but it’s pretty low friction.

So far, the system has been working. Offermatic says that its tests show that top retailers are yielding a 14.5% conversion rate, which is far higher than usual.

Offermatic is pretty unique at this point, but it’s going to see increasing competition as other deal providers link transaction history and loyalty cards with special deals. For example, Foursquare recently did a deal with Vons that revolves around the Vons loyalty card; expect similar deals to come from Foursquare and other services in the future.