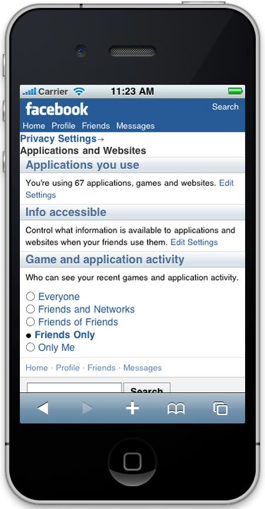 Facebook’s mobile presence has long been an important part of the site — Facebook now gets over 200 million users between its various mobile web sites and smartphone applications. And because so much content gets posted from phones, Facebook has seen fit to port over its extensive privacy controls to mobile. The site initially launched a mobile version of these controls back in August, and soon they’ll be getting an upgrade.

The new controls being announced today have to do with the applications that you’ve connected to Facebook. Between all the apps you use Facebook Connect for, and the ones you’ve installed on Facebook proper, there’s a good chance that you’re sharing your data with a lot of different sites — some of which you may have forgotten about.

To help manage this data flow, Facebook launched a dashboard for connected apps in October — you can see which apps are using your data, how often they’ve accessed it, and what exactly they’re looking at. And over the next few weeks, Facebook is adding these controls to its mobile site.

This may not seem like a huge deal, but remember that web-connected smartphones are spiking in popularity and will outnumber PCs in the next few years. And through efforts like Facebook Zero, Facebook is drawing users who may not even own computers.