Wikipedia chronicles the lives of plenty of the most important figures to ever walk the Earth. Unfortunately, for those countless people who fail to discover an element or pen a bestselling novel, Wikipedia’s editors are quick to strike down biographies that anyone might try to write about them. And when they die, their stories — which may not be important to the public but are priceless to their family and friends — have a habit of fading with them. 1000memories thinks there’s a better way.

The site, which launched last July, sets out with one big, important goal: helping family and friends cherish and share the memories of someone that’s passed away. This week, the company has launched some key new features to make this sharing easier and more effective than before. 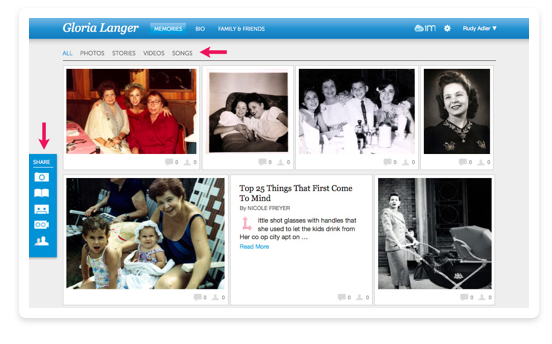 Founder Rudy Adler says that one of 1000Memories’s biggest challenges has been to find a way to weave together the memories that its users have shared to that they really capture the lives of the departed. One of the problems before now was that various kinds of content people uploaded — photos, stories, and so on — were broken into different categories, and you had to navigate between them. Now, 1000Memories features a ‘quilt’ view, which compiles this content into a single page, presenting an entire life in a single glance. It sounds like a simple change, but it’s very effective.

Another new feature is the ability to tag people in photographs. This may sound a bit ‘social networky’, but Adler says that it’s been a top-requested feature. After all, people tend to change in appearance as they age, and you may not recognize that the boy standing next to your grandmother in a 50-year old photograph is in fact your uncle.

Finally, the site has expanded its biography section. Users can now co-edit a text area that serves as the departed’s life story — the basic facts of where they grew up, where they lived, their important relationships, as well as the key events in their lives. And there’s also a section of ‘quick memories’. These sound silly — you just jot down random habits, favorite foods, and jokes that the deceased used to tell. But it makes it easier for everyone to contribute something, and oftentimes it’s these little things that bring back the best memories.

1000Memories isn’t talking about user numbers yet, but the company has grown a bit — it’s hired two full time employees, in addition to its three founders.