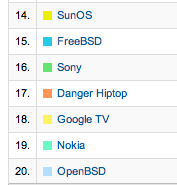 We’ve already gone over why quick massive price cuts probably aren’t a good early sign for the platform. But the browsing stats we’re seeing are actually much more grim. Specifically, since the first devices started showing up in our logs two months ago, they’re coming in at number 18 on the list of top devices visiting TechCrunch. That’s one spot behind the Danger Hiptop, aka the Sidekick — a device that’s roughly eight years old.

Percentage-wise, Google TV is providing an amount of traffic that is statistically too small for Google Analytics to say anything beyond than it’s greater than 0.00 percent. Yep.

Now, before the apologists start whining, a few things. Yes, it’s obviously very early in Google TV’s lifespan. And yes, the product will undoubtedly get better. And yes, there will undoubtedly be more devices to come. And yes, perhaps the platform is more geared towards media content from the web that’s optimized for it — though that’s not looking too hot either. (And yes, it runs Android, but like the iPad with iOS, Google Analytics breaks it into a separate category.) But this still was supposed to be about bringing the Internet into your living room. And unless the device is selling to a demographic that aren’t the typical early-adopters that read TechCrunch — something which probably isn’t the case — it’s just not looking too good right now.

More likely is that people just aren’t doing a lot of typical web browsing from the device. And for good reason — it’s not very good for that. But again, that was part of the promise of the device. Surf the web, from your couch. Instead, it seems to just be: search for video that’s likely being blocked but can probably be found elsewhere on other devices, from your couch.

Further, other devices beyond the traditional PCs and laptops have been very good at introducing a new kind of web browsing experience. The iPhone, iPad, and Android devices are all sending a lot of browsing traffic our way on a daily basis. And it continues to grow each day.

When the iPad launched, we noted the huge browsing numbers it was sending our way. Some people thought this was a fluke, that people were simply testing out the device and browsing as sort of a novelty. But all these months later, the iPad remains the number four device when it comes to browsing TechCrunch. It’s behind only Windows machines, Mac machines, and the iPhone.

Perhaps more importantly, the browsing traffic coming from these devices have continued to go up as time has gone on. The Google TV? Not so much. Its single best day sending traffic to TechCrunch was on October 23. It’s been mainly trending downward since then. Though it did manage the pass the Danger Hiptop to become the number 17 device in the past 30 days. So that’s progress, I guess.