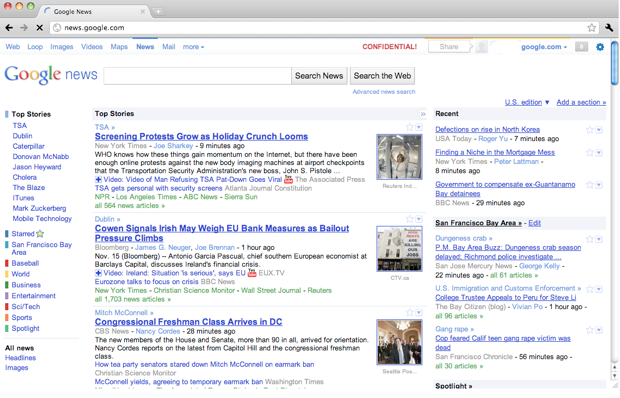 While we haven’t 100 percent confirmed it yet (update: we’ve confirmed with a source), what you see above is what we do very much believe to be a picture of Google’s latest social foray. Yes, it’s the artist formerly known as “Google Me”, then known as “Emerald Sea“, and now known as “Google +1“.

As you can see, it’s a toolbar that exists along the top of Google’s properties — in this case, Google News. There’s a Share button, a place for a Google account icon, and a Google username. Next to it is a numerical count — it’s not clear what this is for just yet. (Maybe a share count?) And next to that is an options menu.

One other important thing to note: the “Loop” area in the left side toolbar links. This is exactly in-line with what we’ve reported so far about Google +1 — namely that a key part of it is based around “loops”, which seems to be Google’s word for “groups”. Loop is also what we’ve heard an iPhone app in testing is being called.

Finally, remember that we reported on a new Google toolbar area being tested out a few weeks ago. It appears that this is very much to make room for Google +1, which should launch early next year.

Below, find some clearer pictures of the area.

We’ve reached out to Google for comment on this image, but have yet to hear back. We’ll update if and when we do.

Update from Google (that was quick!):

“We’re always experimenting with new ways to improve our products, and we have already confirmed that we are focused on incorporating social elements across Google. But we have nothing new to announce at this time.”