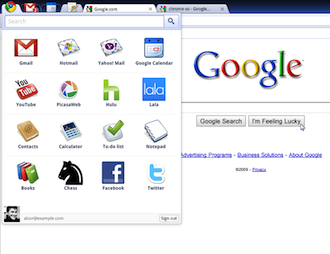 It’s now just about time for the Chrome event Google is holding in San Francisco, presumably to show off both the new Chrome Web Store and the beta version of Chrome OS. We’ll be there to cover it live, but here are a few last-minute tidbits.

First, as Google Operating System noticed, Google uploaded two new videos to the YouTube Google Chrome channel earlier today. While neither video is live, the thumbnails are and confirm that one is about Chrome OS (a tour) and one is about the Chrome Web Store.

Second, some users are apparently reporting seeing an alert in their version of Chrome that asks them if they want to “test drive” a new Chrome notebook. We haven’t been able to confirm this, but have heard something about how the launch of the hardware that runs the OS will be in some sort of “test drive” mode.

Third, it looks like there will be at least two games installed by default with Chrome OS: Entanglement and Poppit, developer Peter Beverloo noticed the other day. It would seem that these two games (made by third-parties) will be in addition to the regular group of Google Apps like Gmail, Calendar, Docs, etc, that will be default apps for the new OS.

Fourth, a number of partners will be on hand at the event today to show of things for both Chrome OS and the Chrome Web Store we hear. Expect some other big games to be a part of this.

It still seems as if Chrome OS running on dedicated devices will be a bit half-baked at this time, but a very limited “test drive” should help them iron out some bugs quickly. At least Cloud Print looks good to go. More to come.