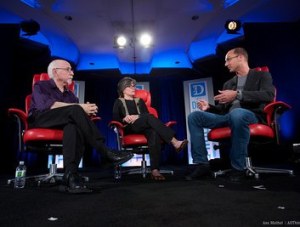 Speaking at the Dive Into Mobile conference today, Google’s Andy Rubin (besides showing off Honeycomb) had a few interesting, but not too controversial, things to say about Android and its competitors. The primary message he seemed to be pushing was that the consumers were being allowed more than ever to shape the market, and that Google is subject to their whims as much as anyone else, though perhaps (in his opinion) more willing to accommodate.

Although Android is a runaway success by many measures, it has its weaknesses, a couple of which were probed by Kara Swisher and Walt Mossberg, who were conducting the interview. First on their minds seemed to be the small impact, not to say failure, of the Nexus One, and the efforts of carriers to “personalize” Android.

Rubin’s response to the Nexus One issue was the sentiment that’s been adopted for some time now, that they bit off more than they could chew. The European model (as he called it) of choosing a phone and then a service to go with that phone isn’t ready to be adopted here yet. He says they’re shooting a little lower with the Nexus S in that they’re selling through normal retail channels.

As for the bloatware found on so many phones, including the Nexus S’s forbear, the Galaxy S, Rubin said that consumers are voicing their opinions and voting with their wallets, which I think was his way of tacitly admitting that Carrier garbage is a bad decision and people will reject it one way or another. I suspect once there’s a really consumer-friendly root or just vanilla install available, people might start doing that to rid themselves of the dozen sponsored apps on their new phone.

Rubin had nothing but kind words for Apple, praising them faintly but clearly avoiding any real opinions. He reserved a fair amount of venom for Microsoft, actually, disagreeing with their design decisions and mentioning that even the ultra-modern Windows Phone 7 is saddled with “this package of stuff that was invented before the Internet.” I suspect there’s plenty of legacy code in Google’s borrowed libraries as well, but that’s neither here nor there. He softened these remarks later by calling it “a good 1.0 product.” I’m sorry Andy, did you see Android 1.0?

On the business and income side of things, he stated that if Android were to break off of Google right now, it’d be profitable, though that’s kind of a hard statement to justify. We can probably just take it to mean that their revenues from ads served through Android devices and such are greater than the costs of development and administration. He adds, though, that he would never have made it as a start-up.

Mossberg pressed Rubin on a potential Nokia connection, but Rubin was coy, saying only that the company has new leadership and is evaluating options. Damn, they better be. They’ve been cruising for a long, long time now.

On tablets, he makes this excellent analogy to cars: once you learn to drive one car, you can pretty much drive them all, reflexively (it helps to learn on a manual, though). We’re not at that stage yet, as I tend to point out whenever this issue comes up, and it’s not until we develop a relatively standard gesture and UI language that tablets will be able to be truly pick up and play.

It was pointed out, and correctly if you ask me, that Google has a reputation for being voracious for user data, collecting every little scrap it can. By reputation, though not necessarily in practice. Being a company that deals in this kind of information has a cost, though, and Rubin said the only way to combat it was to be open and transparent about it. Consumers (hopefully) will eventually recognize anything else as FUD.

For this post, I was working from the All Things D liveblog here; I’ll update if a full transcript or video becomes available.