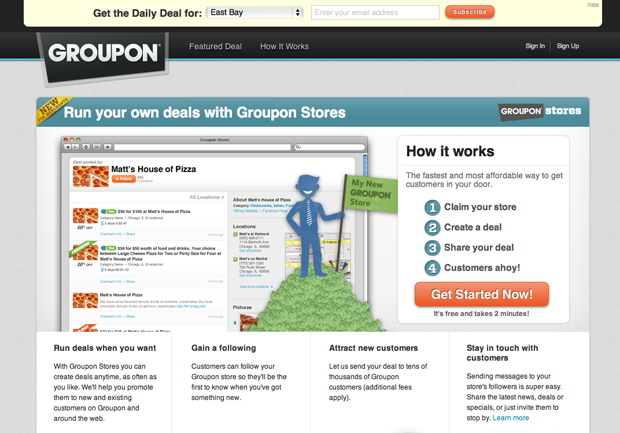 I don’t know if this is genius timing or the opposite (leaning towards the latter), but daily deals site Groupon, which is rumored to be holding a board meeting tomorrow about a possible Google deal, has chosen tonight of all nights to launch its Groupon 2.0 platform which truth be told is pretty farsighted . Everything else aside, the whole concept is extremely smart especially with regards to how we will all probably be shopping in the future, i.e. socially. 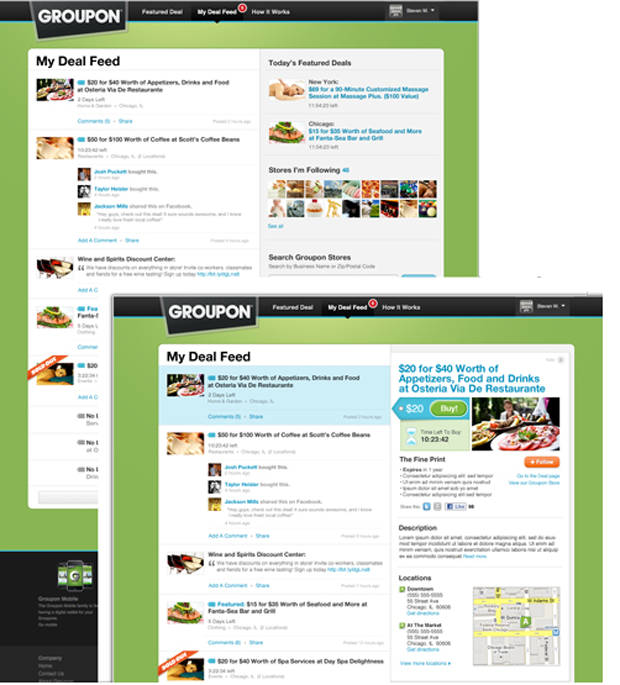 Groupon Stores is pretty remarkable when you realize that merchants can now offer customizable Groupon deals whenever they want by going here, claiming their store and creating a deal themselves with no middleman and just a 10% commission on all sales, as opposed to the 50% the company usually takes off.

From today on merchants in select cities can set up their own Groupon distribution presence as well as run their own offers like this one. In addition, merchants can submit deals for Groupon promotions and perform hardcore customer retention management by getting customers to follow their individual stores on Groupon, Twitter style — a total boon for advertisers.

And just like Facebook has its Newsfeed, Groupon will now have a Deal Feed section in its user profiles, allowing a casual user to follow all the individualized deals and merchants that pertain to them. Groupon’s Deal Feed will let you see a stream of deals personalized to you including daily deals in your area, merchants you follow and recommendations for merchants you should be following.

Groupon CEO Andrew Mason says that the company’s product expansion is the most logical thing to do when thinking about its massive scale (the company is reportedly making $500 million in annualized revenue), “Today things are different – our biggest problem is that demand is so high, merchants often wait months to be featured. And while we once only had a few thousand customers per city, now we have hundreds of thousands – making it increasingly difficult to find one deal that satisfies everyone.”

With its most recent move, Groupon, which has 33 million subscribers in 35 countries,  is poised to satisfy almost every merchant or advertiser who wants a slot. The new features launch as of today in Chicago, Dallas, and Seattle, and should be rolling out to rest of us plebes shortly.