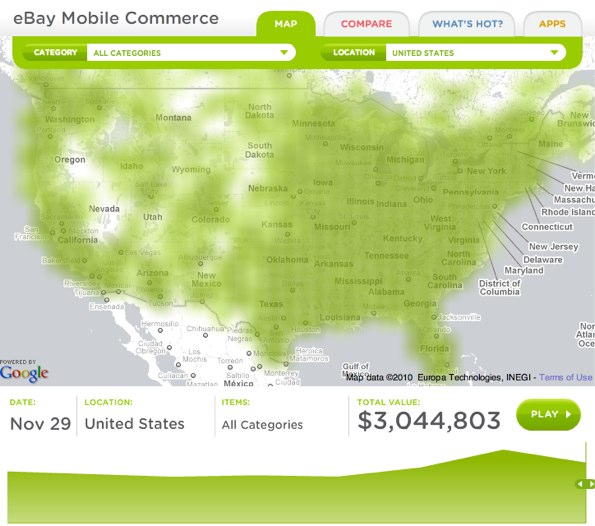 There’s no question that mobile sales are rapidly growing from eBay, who saw sales in the U.S. from its suite of mobile apps nearly double on Black Friday. Today, eBay is releasing its Cyber Monday data, reporting that mobile sales for the Monday after Thanksgiving were up 146 percent. In conjunction with the announcement eBay is also releasing a new infographic application that provides a visualization of mobile shopping trends from Nov. 22 to Nov. 29 within the top 20 eBay product categories across the United States, Canada, France, Germany, the United Kingdom and Australia.

eBay also reported that consumer adoption of its mobile suite of apps increased more than threefold based on items purchased during the week of Thanksgiving and “Cyber Monday” compared to the same period in 2009. Consumers shopped on eBay’s mobile apps primarily for cars & trucks and clothing & accessories during the period.

Mobile data also shows that, unsurprisingly, the iPhone was the leading mobile device on eBay this year, in terms of sales, with two-thirds of its mobile revenue from the holiday week coming from iPhone users. The other third was comprised of Android, BlackBerry and mobile web users combined, as well as Windows Phone 7 users. eBay’s primary iPhone app is by far its most popular mobile offering and has seen over 13 million downloads.

In the U.S., cars & trucks topped the list of products purchased by mobile phones, and cell phone & PDA accessories and women’s clothing led in terms of total number of transactions. During November 22 through November 29, the most money was spent using mobile phones in California, Texas, New York, Florida, and Pennsylvania. California was the most active state in both sales volume and number of transactions.

In terms of international mobile trends for the period, cars and trucks led in mobile sales in all of eBay’s top markets except for France. French mobile shoppers focused their purchasing mostly on clothing & accessories and toys. The U.K. was by far the strongest in purchases of cars & trucks, which made up 20 percent of mobile sales, while Germany was the only country in which the consumer electronics category appeared in the top five.

The mobile commerce visualization is actually pretty cool. The application features a playable heat map of sales by geography over the period, and allows you to compare sales by category and location, and will show you what’s hot in terms of products by location and date. eBay actually launched a similar application last year for web sales.

Another compelling data point: according to an eBay survey, over half the people who shop regularly on their phones are comfortable spending over $100 on a purchase, with 14 percent willing to spend over a thousand dollars (eBay notes that earlier this year an eBay shopper purchased a Mercedes-Benz for $240,000 using their mobile phone). On the average, mobile shoppers spend over $100 per month.

It looks like the holiday season is treating eBay well this year. eBay has already adjusted its previous forecasts of a total of $1.5 billion in mobile sales for 2010, to report that consumers will spend over $1.5 billion in mobile sales. Of course Black Friday and Cyber Monday tend to be the peak days for holiday shopping, but it should be interesting to see if the company can generate the same sort of growth in sales over the next month.