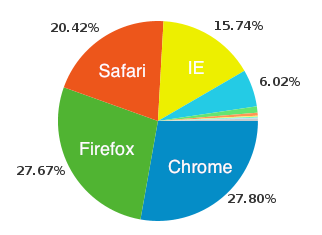 It has finally happened. It took a little longer than anticipated, but Chrome has now passed Firefox as the browser most often used to visit TechCrunch. For the month of November, Chrome is number one for the first time, edging out Firefox 27.80 percent to 27.67 percent.

Back in early September, on Chrome’s second birthday, we noted that Google’s browser had been making huge gains over the past couple of years and was only about 3 percent away from passing longtime leader (again, in terms of browsing traffic to TechCrunch) Firefox. The quickly progressing Firefox 4 beta likely slowed Chrome’s march to the top a bit, but it couldn’t fully hold it back. Now the question is: can Chrome hang on?

Mozilla is slated to launch Firefox 4 early next year. So far, the update looks to be a big improvement both in terms of speed and functionality. Features like F1 (Mozilla’s experimental social browser add-on) and Panorama, are sure to be hits.

Microsoft, meanwhile, is preparing to launch the initial release of IE9, a version of the web browser which finally seems ready to adhere to actual web standards.

And then there are the social browsers, which are coming around again: Flock and RockMelt. The difference this time is that both of these browsers are built on top of Chromium, the open source browser that Chrome is also built on top of. Previously, Flock was built on top of Firefox.

But Google isn’t sitting around doing nothing. The search giant has been refreshing their browser like it’s going out of style. About every six weeks we now get a new version of Chrome. The big changes are less common than they were a year ago, but Google still has plenty of stuff they’re working on.

The Chrome Web Store, for example, is about to launch. This will feature web apps that can be downloaded through Chrome. And while Google says that many of these apps should work fine in “modern browsers” (their cute way of basically saying “anything but IE”), you’ll still need to access the store through Chrome.

And then there is Chrome OS, which will launch in beta before the end of the year. It’s Chrome, but it’s also your entire operating system.

Here’s the breakdown of the big boys for the month of November:

What’s most surprising here may actually not be that Chrome passed Firefox, it may be how high Safari is. If Chrome has something to worry about, it might actually be Safari, believe it or not.

If you’re wondering how Apple’s web browser is so high on the list, remember that it’s the browser used on every iPhone, iPad, and iPod touch now. These devices boost Safari’s numbers by well over 10 percentage points. And if mobile traffic keeps growing the way it is, there’s a chance (just a chance) that Safari could even eclipse Chrome and Firefox as the top browser viewing TechCrunch. Since August, Safari has grown by two percentage points, while Chrome has gained just one.

Prior to this month, Firefox had been the number one browser visiting TechCrunch since at least late 2006, when we started keeping track of such stats. While IE was obviously the dominant browser back then (and still is number one overall), the Firefox usage shouldn’t be too surprising since those users tended to be more tech-savvy, and more likely to be reading TechCrunch. The problem for Mozilla now is that many of those same people are now using Chrome instead.

It has been a nice four-year run, Firefox, but we’re now in the age of Chrome.