Back in July, I wrote about a nifty new startup called Standing Cloud that makes it easy to set up hosted installs of dozens of cloud-based applications — like WordPress, Drupal, or Trac — with a single click. Unfortunately, all our commenters seemed to care about was the company’s logo, which consisted of Papyrus font set against a plain white background.

Now Standing Cloud is back with a new, much more attractive logo that should appease all you font critics, and it has some big news in tow: it just closed a $3 million Series B funding round led by Avalon Ventures, with participation from existing investor Foundry Group. This brings Standing Cloud’s total funding to $5 million since it was founded in 2009.

Standing Cloud’s core offering lets you choose from over 60 applications to install, and it gives you the flexibility to decide which cloud hosting provider you want to use them on. Since we last covered them, there have been some tweaks to the business model: previously, Standing Cloud charged users $19.95 per month for access to as many applications as they wanted, but users had to manage and pay for their bandwidth and hosting costs in addition to that.

CEO David Jilk says that some users found this confusing, so the company has adopted a different model: users will now pay $24.95 per month per application deployment, but bandwidth costs are included. Obviously this could make things pricier if you plan to deploy multiple apps, but Standing Cloud’s value proposition is all about keeping things simple, so it’s a change that makes sense.

Another change is the addition of the Standing Cloud Application Network. Jilk says that many small and medium businesses who might be interested in Standing Cloud aren’t necessarily familiar with the various applications it offers, or which ones might be best for them. So the site is building out a directory of these applications with fleshed out descriptions. Each application listing will include references to recommended consulting firms that specialize in working with that app, in case a business needs something customized.

However, Jilk says that this directory of applications (which will primarily be composed of open sourced apps for now) doesn’t represent a change in Standing Cloud’s strategy. Rather, it’s a compliment to it — if it becomes a great resource for learning about these applications, then it will inevitably drive more businesses to use Standing Cloud’s service. 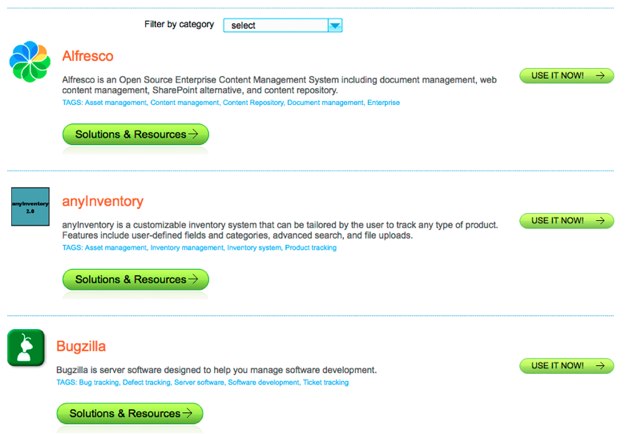