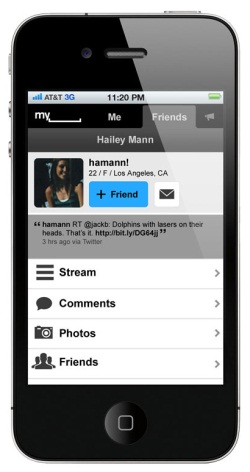 While News Corp. is now openly admitting that it is exploring options for Myspace (don’t call it MySpace anymore!), the company is still executing, albeit slowly, on its mobile strategy.

This morning, the company announced that it has launched a new mobile website to extend its “social entertainment experience” to mobile devices across the board.

The company will soon release a brand new iPhone app to boot.

Unsurprisingly, social interactions when on the go remains a popular activity within the Myspace demographic, so it makes sense for the social networking company to make the core experience of its service portable as efficiently as possible.

“We are creating the best experience for Myspace mobile web users by taking the most compelling entertainment elements of Myspace.com and making them portable, while simultaneously building a portfolio of independent mobile applications tailored specifically to entertainment categories.”

The new Myspace mobile website is accessible today on all iPhone, iPod touch, Android, Palm and select Nokia and BlackBerry devices and features (mostly music-related) celebrity news, videos and whatnot, as well as the ability for users to share photos, videos, links, status updates and more across multiple social networks (cough).

The Myspace iPhone app isn’t available yet – the company says it will only be made available in the coming weeks – but will focus on the site’s activity stream. It actually sounds pretty nifty: Myspace says that, if a user has music from specific bands on his or her device, the app will automatically populate the user’s stream with updates from those bands.

Neither the new mobile site or the iPhone app will require users to log in.