Last week, MercuryNews.com revealed that Apple made a massive land purchase near their current headquarters in Cupertino, CA. They actually bought the old HP campus, which the electronics giant announced they were moving out of to consolidate their offices in nearby Palo Alto. So perhaps it shouldn’t be too surprising that HP bought something of Apple’s today: their hashtag on Twitter.

Okay, Apple doesn’t technically have any rights to a hashtag containing their name on Twitter. In fact, maybe HP is targeting people tweeting about the fruit. Yeah, right.

As you can see here, the HP Official Store has paid to promote tweets with links to computer sales they’re having to people searching for Apple. They have a group of rotating tweets they’re promoting, but all point to sales they are having at the HP online store — a store which couldn’t look more different from Apple’s.

This kind of rivalry targeting is done all the time on Google and other search engines, but it seems to becoming more of a norm on Twitter as well. A few weeks ago, we saw competing ads on Twitter from Microsoft and Google for mobile.

Update: As Steven notes in the comments, HP bought the Twitter ads for #mac as well. Nice.

Update 2: And as Kevin points out below, they bought #macbook as well! 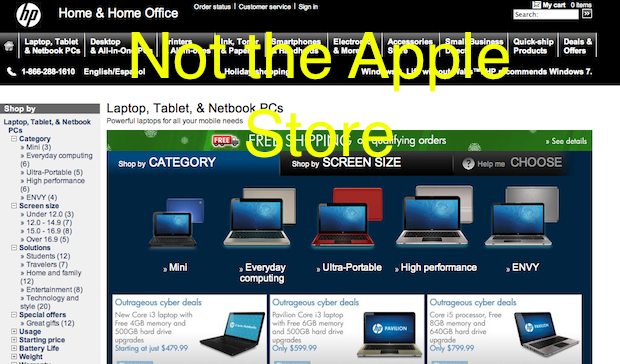