The United Nations Climate Change Conference COP16 kicked off yesterday in Cancun, Mexico. Delegates from 192 nations are attending through December 10 hoping to determine a collective, international approach to slowing and preparing their countries for an increase in global temperatures.

Conference goals— laid out at an opening address by Christiana Figueres, the executive secretary of the U.N. Framework Convention on Climate Change (UNFCCC)— include the establishment of: commitments from countries to stop deforestation, a fund worth approximately $100 billion-a-year by 2013 to help poor people cope with climate change, and mechanisms that facilitate technology transfer between nations.

Last year’s COP 15 conference in Copenhagen failed in its primary mission to draw countries into a legally binding agreement to reduce their greenhouse gas emissions. After the event, however, seventy countries signed the Copenhagen Accord, a voluntary political agreement to address climate change. As part of the accord, the U.S. said it hoped to cut its greenhouse gas emissions 17 percent from 2005 levels by 2020 but made no firm promises.

Studies published today by the Royal Society’s Philosophical Transactions A journal predict that world temperatures could rise by 4 degrees Celsius (7.2F) as soon as 2060 if humanity’s contributions to climate change go unchecked.

The effects of warming that aggressive would include everything from drinking water shortages, to the loss of marine life (and important seafood supplies) as oceans become more acidic. The costs for nations to cope with such changes would be astronomical. 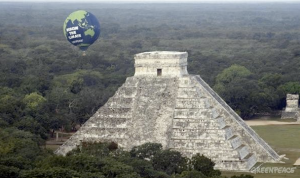 Climate change deniers continue to shrug off studies illustrating how people exacerbate climate change. Although the heat-trapping nature of carbon dioxide and other gases was demonstrated in the mid-19th century, skeptics still believe a rise in global temperatures is all natural, or that there’s little we can do about global warming save to accept it and adapt.

NASA rsearchers, however, have confirmed that the world has been warming up more quickly in the last thirty years than ever before [ed note: in recorded history] with the 20 warmest years having occurred since 1981 and all 10 of the warmest years occurring in the past 12 years, thanks in measurable part to greenhouse gas emissions resulting from human energy consumption and industries.

The executive director of the Environmental and Energy Study Institute (EESI) in Washington D.C., Carol Werner, says that even climate change deniers should hope for some COP 16 outcomes:

We would like to see a formal agreement between countries and companies to curb black carbon, or soot, produced from diesel, inefficient cookstoves and open burning heat and energy sources. And we would like to see continued, respectful negotiations led by the United States and China that will shape the way that countries agree to monitor, report and verify their energy consumption, production and emissions.

If nations do not make concrete promises and legally binding agreements to address climate change, the private sector may outpace them quickly enough to make an impact. Hundreds of c-suite level executives are attending COP 16 and ancillary summits such as The World Climate Summit, Green Solutions, the World Business Council For Sustainable Development’s Building Bridges event, and the Climate Group’s Climate Leaders Summit.

EESI’s Werner says the COP has become a place where companies— perhaps even more than countries— now go to showcase their own clean technologies and environmental best practices, while lobbying for policies that will benefit, or at least not adversely effect their industries.