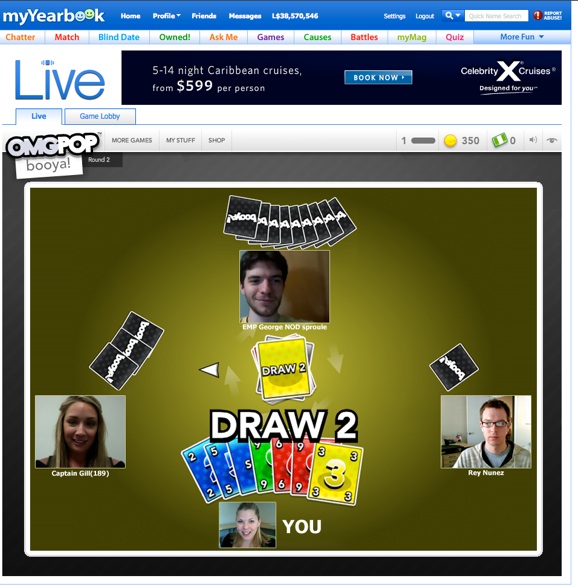 In general, the key driver of social networking so far is games on Facebook. But most of those games aren’t social in the way that playing Monopoly or cards with your friends and family over the holidays is social. MyYearbook, which is a small but profitable social network focussing on younger teenage users, is going to try to make online games more social by getting its members to play together at the same time. The site has 4.7 million active visitors a month generating nearly 1 billion pageviews. It has about 1 million active users every day who spend a third of their time playing games and using other apps. The company makes its money from virtual currency and in-game offers, and is on track to make about $22 million in revenues this year, according to CEO Geoff Cook

In mid-December, myYearbook will launch a new set of a dozen live games which will combine casual games with live video chat. These are basic games like Warship, Gin Rummy, Chess, Checkers, line of Four, and Tic Tac Toe. MyYearbook is also partnering OMGPOP (which specializes in live online games), Heyzap, and Viximo to bring some of their games into myYearbook with a live video component. These aren’t amazing games. That is not what they are about. They are designed to get people to interact with one another, to make new friends or to flirt. They are games everybody knows and everybody can play. 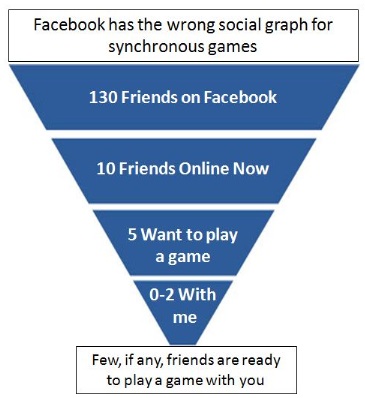 “Our take on social games is to help you meet new people,” says Cook. He is betting big on synchronous games that can be played live with everyone present at the same time. Most games on Facebook are asynchronous—players take turns whenever they happen to be online and games can drag on for days. Only five of the top 100 games are synchronous. Facebook has the “wrong social graph” for realtime games because the chances that one of your friends is online right now and wants to play a game with you aren’t that great (see slide at right).

MyYearbook takes a different approach, using games as a social lubricant to get you to play with people you don’t know. There are a lot more of those people online at any given time. Gamers will be able to specify what types of people they want to play with using filters to sort by gender, age, and location. In order to avoid the Chatroulette problem of guys exposing themselves over live video, an extensive flagging and moderation system will be in place. Since every member has to be logged in, violators can be blocked from the system. But myYearbook also employs 20 moderators, which will increase to 50 moderators just to police the system.

Another Chatroulette problem Cook hopes to avoid is people constantly hitting the next button to find other players. Players will gain or lose karma points depending on how long they play, and if they get to zero karma points, they will be blocked from playing for a certain amount of time.

For realtime gaming to takes off on myYearbook, however, it will need better games. Partnering with gaming companies like OMGPOP and other developers is the way to make these games more compelling. If myYearbook can become the place where teenagers go online to hang out and play games, plenty of developers will want to create games for the platform. 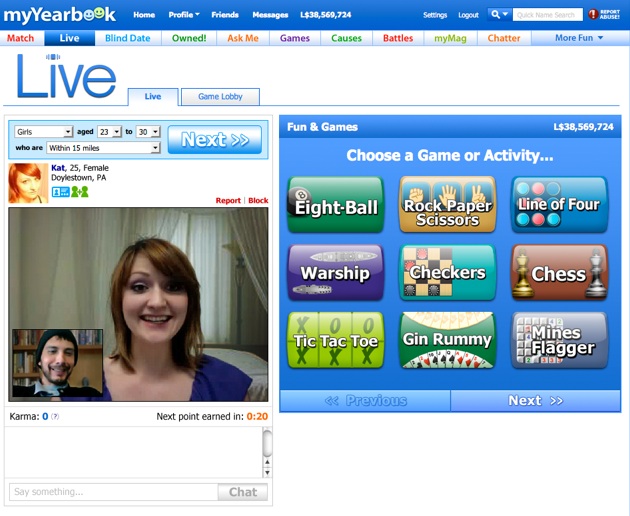