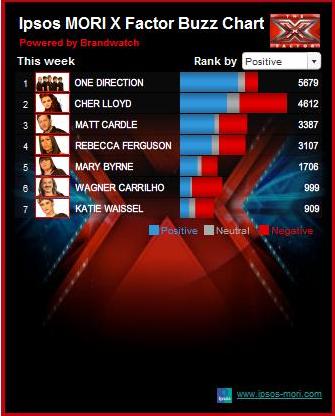 Glancing at my Twitter stream of an evening, I’ve been surprised at the number of Geeks watching The X-Factor TV show (in the UK) which is similar to American Idol . But then I guess it lends itself extremely well to witty asides on Twitter. This actually makes the show worth watching, much more for the social media discussions around it than the show itself. It’s like being at a football match where the crowd’s chants are more entertaining than the game. If there is a business model for bland, manufactured TV I guess this is it.

So we make no apology for passing on the news that social media monitoring company Brandwatch is claiming that it can predict who is about to exit The X-Factor TV “musical competition” based on what’s being said about it on Facebook and Twitter. I asked what else they track, but sure enough, Twitter tops the list as a data source.