Looks like President Obama isn’t the only one resorting to Facebook as a way to reach the American people. In a first for a U.S. President past or present, former President George W. Bush will hold a discussion and Q&A live from Facebook headquarters in Palo Alto. The event will start in about 20 minutes at 2 pm PST.

Bush will be talking to Facebook employees about his new book Decision Points, and those of us not employed by Facebook will have the opportunity to watch it on Facebook Live and the Livestream above. According to The Next Web, Facebook CEO Mark Zuckerberg himself will in fact moderate the discussion along with Facebook General Council Ted Ullyot. Ullyot also happens to have been an attorney for the Bush White House, which might explain why the former President’s only Bay Area appearance is at the social network.

Bush belatedly joined Facebook over the summer primarily to promote Decision Points through his fan page. W. currently has 619,516 fans as opposed to the 16,889,927 people “liking” the decidedly more web savvy Barack Obama.

We’re hoping the Q&A will also extend to the folks at home, or that some Facebook employee will muster up the courage to ask Bush what he thinks about Wikileaks. Stay tuned! 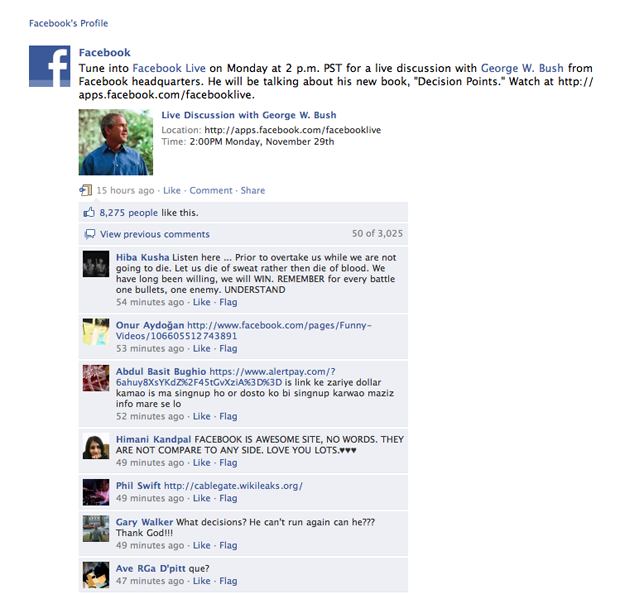