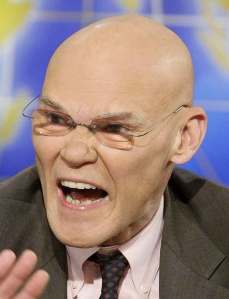 Last week’s guest on Press:Here was Tim Wu, author of the new book Master Switch: The Rise and Fall of Information Empires. Wu also wrote this guest post for us about why we should all fear Steve Jobs.

In general Wu — who gets credit for coming up with the term “Net Neutrality” — has a really important mission whether you agree with him or not: Raising alarm bells that the Internet, like every mass communication medium that has come before, could one day become strangled and controlled by a handful of companies.

From what I’ve read and from our conversation on and off camera last Thursday, Wu seems to stop short of saying what has happened before on radio, telegram and television will happen with the Internet, saying it could happen. The question, he says, is whether there is something inherently different about the Internet from a technology standpoint that keeps it inevitably open. I think what keeps it from happening is something else: The community around the Internet and the age of modern entrepreneurship in which we live.

Unless the FCC totally screws up on Net Neutrality, big Internet companies just don’t have the luxury of shutting upstart rivals out. You want to be cynical and say money drives policy in Washington? Fine. There is more money on the side of the Internet being open than the Internet being closed.

Wu argued that there is nothing different about entrepreneurship today in Silicon Valley than there was back in the early days of the telephone or the radio, and– channeling my inner James Carville– I argued why he was wrong. Here’s the gist of my argument, which we didn’t have to time really get into on camera:

1. Invention versus iteration. There was probably more raw invention in early waves of communications industries because a lot of Internet companies have been able to stand on the shoulders of giants. Try inventing the consumer Web without copper lines going to homes and businesses and try inventing all of that without, say, electricity. As the Web gets longer in the tooth, there’s less sheer OH-MY-GOD! innovation and more iteration. Facebook was a version of social media that worked, not the first social media site; same with Google and search. And unlike a lot of the other waves Wu talks about, at this point the consumer Internet is almost purely software development, not hardware and manufacturing; it’s mostly design and user experience not hardcore circuitry and science.

This may sound like a knock, but when it comes to commercialization it’s not. The more revolutionary the invention, the harder it is to fund it, manufacture it, commercialize it and get broad distribution for it. The lower the barrier for disruption, the more it occurs and the fewer opportunities large incumbents have to keep markets closed by, say, sucking up manufacturing capacity or raw materials. The assets for the web are smart coders and venture cash. The former tends to flow out of big companies seeking new challenges and new stock options. There’s no shortage of the latter– in fact there’s an unhealthy glut of it. When new upstarts are awash in an industry’s natural resources, it’s hard for incumbents to keep them out.

2. Lines of credit versus venture capital. Wu argues that modern venture capital isn’t a differentiator because there were ways of financing companies in earlier waves of technology, like lines of credit. Come on. Really? There is a world of difference between an entrepreneur able to put up enough personal collateral to secure a line of credit and an industry where thousands of VCs have $20 billion-plus burning a hole in their pocket looking for high-risk, no revenue opportunities in which to invest. By definition it opens the concept of being an entrepreneur up to huge new swaths of the global population. That means at a minimum that more companies are started, and that means there’s more opportunity to start the next Google or Facebook. The barrier of financing for a smart idea is all but eliminated.

How different would, say, early Hollywood have been if any kid with an idea for a movie studio had millions of dollars in funding? It creates huge, constant pressure on incumbents to keep users happy and — as mentioned earlier– incentivize the best employees to stay because suddenly jobs at startups not only offer stock options but they have enough cash to pay competitive salaries. And if one hot company gets traction it means hundreds more are started the next day by VCs who want “their YouTube,” “their Foursquare,” or “their Groupon.” This much money with the sole purpose of backing new companies starts to become a game of odds. Every VC would have to be utterly inept not to accidentally back the next great Web mogul.

There is a fundamental difference in how banks and VCs make money and what keeps them in business. Lenders want companies to do well enough to repay debt, and then take bigger loans to continue building their business. Venture capitalists want continual waves of industry disruption. When you have power and money behind breaking not protecting big companies, it’s a different scenario. Building a huge company is never easy, but entrepreneurs at the center of the Web are hardly the Davids going up against Goliaths that entrepreneurs were in previous information ages of the past.

3. The culture of pioneers versus the culture of young-eating-the-old. Wu’s argument is that when a technology is new, aggressive entrepreneurs flood in, many go out of business and a few survive to become the big winners. He is right that there is nothing unique about that cycle generally. But the uniqueness of Silicon Valley is that it no longer relies on returns from the pioneers of huge new industries, it relies on the young continually eating the old throughout an industry’s life cycle. Witness the lack of mourning when a former giant falls on hard times. Witness the lack of asking for bailout dollars. Witness the constant churning of talent, press and attention towards new things. The hype cycle is a bad thing in a lot of ways for Silicon Valley. But the one good thing that it does is continually champion the new over the old.

Overall, Wu and I agree more than we disagree. If the future of the Internet were up to Google, Apple, AT&T and the federal government, I’d be concerned too. But $20 billion a year in venture capital and thousands of people starting companies all over the world every year aren’t going to cede anyone that right. The biggest evidence of that is Facebook. If the Internet were copying the trajectory he describes, we’d have our winners and they’d be AOL, Yahoo, Amazon, eBay and Google– end of story. I doubt AOL, Yahoo or eBay would argue they are protected oligarchs, and Amazon would be in the same state had the company not dramatically pivoted into new areas. Google dominates, in part, because it is the youngest of the bunch and iterated in business model and product after watching the older search and portal companies. And Google is now feeling the heat from companies like Facebook and Twitter. Mobile Web may prove to be another matter, but there are just no signs to support that the early pioneers of the Web have an advantage that makes them immune to younger challengers.

Indeed in a lot of verticals, late 1990s companies have already tried to flex these muscles Wu fears, and they’ve largely failed. Look at travel where online travel agents who had protected inventory fought sites like Kayak who wanted to spider their travel listings. The big portals tried to do this pre-Google, de-emphasizing the search box in favor of people staying within their walled virtual department store. Google disrupted that by making the idea of sending people away from your site more lucrative. Google got very little time to bask in that. Just a few years later, one of Google’s biggest challenges is trying to find ways to match the dramatic rise of Facebook, when it comes to keeping their key employees and finding their own answer to social and casual games.

Consider the industry that has done the best job using a closed system and high-paid lobbyists to kill startups: Online music. VCs funding nearly any online music company in the last decade could have just made out the investment checks out directly to the labels, and the result would have been much the same. These companies were almost all bled dry with royalties, and then killed. One of the only reasons Pandora has survived is because it catalyzed its loyal users to break congressional fax machines with complaints about proposed legislation that would put the company out of business. But even in this industry where protectionism has killed so many great startups, the labels haven’t “won” because they are still slowly dying. They continue to lose money, because of users like Pandora’s who demand they work with new entrants, rampant and uncontrollable piracy and VCs who continue to fund new music startups like Spotify despite a graveyard of failures. It’s not just the power of the Internet– it’s a powerful community of hackers, entrepreneurs and VCs who send wave after wave of challenges to an industry that they believe should be more open.

Wu says somewhat dismissively in the clip below that everyone always thinks there’s something so different about their own time. While it’s good to sound potential alarm bells, I’d argue that believing that industries and consumers never change is just as flawed of an outlook.

There’s a clip of the show below, go here to hear Wu talk specifically about the state of Net Neutrality.