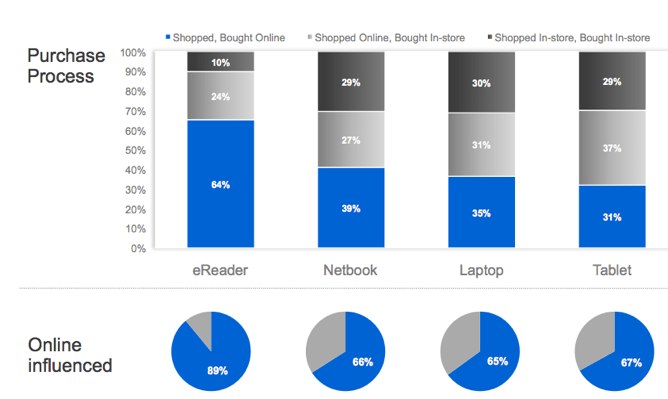 As the holiday shopping season gets into full swing, Google has released a study examining how consumers shop for laptops, netbooks, e-readers and tablets. The search giant interviewed around 4,000 respondents and used analysis of clickstream data from Compete’s 2 million US internet users. We’ve embedded the study below but here are some of the findings that we found most interesting from the report.

In terms of interest, new devices like tablets and e-readers are getting attention in terms of searches on the web. In terms of unique visitors to each category, tablets saw 1328% growth and eReaders saw 114 percent growth. Netbook’s visitors dropped by 50 percent and laptops dropped by 9 percent.

Of course, unsurprisingly the iPad has dominated the tablet category, caused a decline in tablet shoppers considering other devices, according to the survey. And while netbook shoppers consider other devices in the shopping process, these consumers are five times more likely to consider a laptop than a tablet.

In terms of research, consumers on average spend one month researching the type of device they should buy. And 85 percent use the internet to research their purchase. Google reports that 64% of e-reader shoppers both bought and researched online. And 37 percent of consumers interested in tablets searched online and bought in-store.

Google also reports that store or retailer sites are the most frequented among online sources (65%), followed by search engine sites (61%), brand or manufacturer sites (53%), price comparison sites (44%), review sites (29%), and social networking sites (18%). Search drove most number of visits to product detail pages across all product categories and the most qualified leads. And 58% of shoppers perform more than 5 searches on the web for a device. Shoppers who conducted 10+ search queries converted at a rate of 22%.

The laptop shopper skews female (58%), with 50% of shoppers falling into the 18-34 age group, 65% of the group considers 3 brands or more, and 43% want to upgrade from their existing device. The netbook shopper skews male (46%), primarily falls within the 35-44 age group, and most shoppers are undecided on brand with 80% considering more than one device. Of consumers considering both netbooks and tablets, consumers are leaning towards tablets (37% vs. 25%).

While some of these stats aren’t groundbreaking, it is interesting to see the online habits of electronics shoppers based on device. 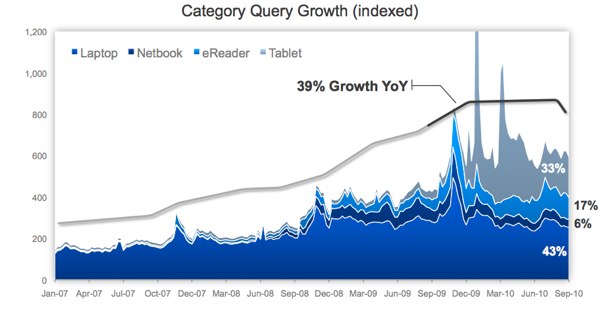