People search site MyLife has flown under the radar for the most part since the site debuted from the merging of Reunion.com and Wink in early 2009. Today, the company is releasing a number of statistics about its growth over the past year.

MyLife is a full-fledged search engine which not only finds people—thanks to aggregated search across social networking sites like Facebook, LinkedIn, and MySpace—but also helps visitors connect with them all on the same site. MyLife pulls information from public records and also allows users to subscribe to the search site to connect with others, track their searches and more.

Founder and CEO Jeffrey Tinsley says the site is getting 26 million monthly unique visitors according to Omniture’s statistics. comScore actually reports that the site saw half that traffic, or 12.7 million unique visitors in October.

Tinsley says that MyLife has 41 million registered members and is adding 2.4 million U.S. monthly members monthly. The site currently lists 205 million U.S. records out of 1.2 billion people records worldwide. And in terms of revenue, Tinsely says that MyLife will see $60 million in revenue in 2010, and is expected to grow by 40 percent in 2011.

While MyLife sees Twitter, Facebook, and LinkedIn as its competition, the site doesn’t really have any social features beyond the ability to find and message people. That being said, people search is expected to be a $10.8 billion business by 2013, according to a recent Forrestor study, so MyLife seems to have hit a possible goldminein terms of revenue. 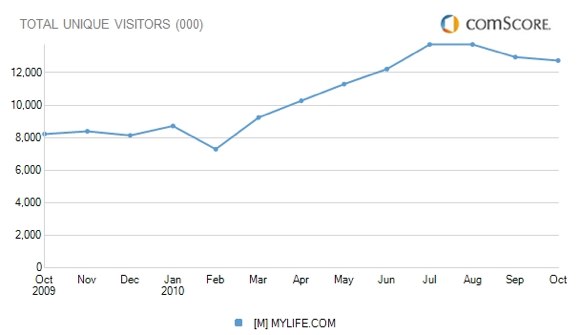