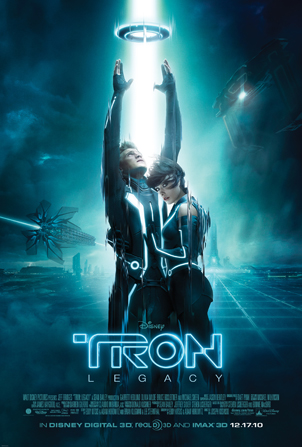 In about 3 hours I’m heading over to a press event to interview some of the major cast and crew for the upcoming Disney release of TRON: Legacy.

I was working on my list of questions to ask last night and realized that the TechCrunch community should really be asking them instead of me. Interviews take place from 12:30p – 4:30p (Pacific Time) and I’ll have my computer with me to look at the questions & comments here.

I don’t know about you, but I have been waiting for a TRON sequel my whole life. When IMDB launched, there was a teaser that something called TRON 2.0 was coming out and was constantly in a state of production.

TRON was a huge part of my childhood, teen years and early adult years. I got something from it at different times in my life and I  still consider it one of the most beautiful movies ever made. The technology Disney used at the time was ground breaking and the hand drawn backgrounds were breath taking. They created a world that has developed a bit of a cult following and I’m looking forward to how they do it for our next generation of children. The great thing about TRON vs other films I grew up with, is that visually a sequel can only get better because it is a plot based on technology and video games. Just think about how far both have come since the first release of TRON in 1982. We went from Discs of TRON the arcade game vs what you can play on your console at home now.

I’m taking the interview footage back to the TechCrunch office Monday, so hopefully we’ll have the videos up on TechCrunch TV starting on Tuesday. Here’s the list of folks I’m scheduled to interview: