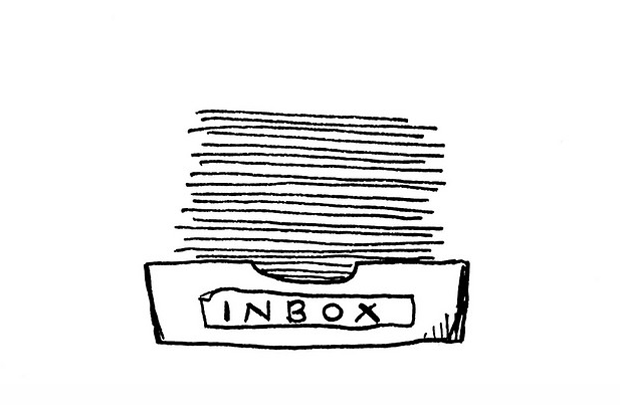 “Over the next five years every product vertical will be rethought to be social. Get on the bus”

Waking up and opening your laptop on Monday mornings has become a terrifying process. Between Gmail, Twitter, Yammer, Skype and Facebook, etc it seems like hundreds of people known and unknown are trying to contact you at any given time. Information overload and fragmentation has gotten so bad that there was even a The Office episode spoofing the still outstanding need for a Universal Inbox (what they called WUPHF) for all your messages.

Prioritization of the deluge of information thrown at you is a huge problem, and one that currently only has imperfect solutions. Some set up an auto-reply declaring email bankruptcy, some do their best to train (when they can) their messaging system to prioritize and most of us just ignore everything but the most pressing stuff. Last Monday, Facebook announced its foray into messaging and took a unique stance on one of the most pressing problems of our time by taking the solution social.

Facebook VP of Product Chris Cox describes the philosophy behind Facebook’s attempt to use its concept of social design to leverage your social graph and get you the messages that matter most, “People have collaboratively built a network of who matters to them. We are living in a world where people are actually online. You’re not scared when you’re on a website and you interact with the people you know mainly.”

Yes there are countless ways to communicate online, but very few with built in restrictions. Adding Facebook’s hat toss to the pile, we’ve recently seen three novel attempts at dealing with information overload, each with advantages and disadvantages:

Gmail Priority Inbox is an example of a whitelist solution. While the Priority Inbox algorithm theoretically sorts your email into only things you want to see, in order for it to work users must tweak a list of  Like and Don’t Like rules. You have to train Priority Inbox to recognize what is “Important” and “Everything Else” for you personally.

The problem with this is there is no one intelligible overarching filter, and the user ends up doing a lot of work. It takes me more time to flag my messages as “Unimportant” than it does to manually avoid junk mail so I get lazy about training, which just leads to more junk mail.

Gmail’s greatest strength (openess) is also its downfall i.e. random emails from sexyfreeipod@hotmail.com. But, if your business depends on open communication and receiving messages from people you don’t yet know, then it currently is the most flexible of your message filtering options as it still allows for spontaneity but doesn’t throw you entirely to the spam wolves.

Many people say that Twitter Direct Messages have become their most efficient mode of messaging thus far due to their size restrictions and incorporation of the Twitter follow social graph into who has or doesn’t have access to you. In fact, as a messaging service it currently is my favorite one to use — I consider my DMs my inbox and my @replies a form of everything else/junk mail.

But anyone who’s ever tried to DM someone who is not following them will point out that Twitter is not without its flaws. In terms of a communication tool, Twitter fails in some ways because someone shouldn’t have to subscribe to all your inane ramblings and mediocre Instagrams just so they can send you a private message. And at 175 million users Twitter still doesn’t cover a wide enough segment of the population that it can be used by itself.

Facebook announced three new elements in its messaging system revamp: Seamless Messaging, Interoperable Messaging and Social Inbox. As it is currently in slow roll out, most users won’t understand the ins and outs of the first two features (and maybe even the third) until the product reaches critical mass (Imagine trying to explain the Facebook Newsfeed to someone who hadn’t yet seen it).

While I don’t really care much for all my messages showing up in a thread and the idea of receiving an email as a text sounds too much like WUPHF for my taste, I am psyched about Social Inbox’s potential.

Why? Well I almost never receive messages from humans, and humans are all I want to receive messages from, at least when I’m on Facebook. Affirming this, Cox says that the social design strategy behind Social Inbox’s creation it is an attempt to combine the algorithmic and whitelist filtering solutions with the knowledge inherent in your social graph, “It really is about the people.”

Social Inbox is split into three parts, Messages, Other and Junk. The two main parts, Messages and Other, are sorted by whether messages are from Friends or Friends of Friends or a part of everything else like pitches and newsletters. Think about it, you can give out your @facebook.com email address to stuff like Groupon and only have to deal with those emails when you’re good and ready, no algorithmic training involved.

Like Gmail, the social graph that gives Social Inbox value also limits it, but there is something amazing about receiving an email sent from outside Facebook that shows up front and center in Facebook Messages prioritized by the fact that the sender is your Facebook friend. If anything this cleans up the Facebook messaging system (Win). Now if only there was an easier way to cull your Friends list.

The revolution in social messaging will be specialized

None of the above options will necessarily kill each other, just like the existence of Yoga doesn’t kill the existence of Pilates as a form of exercise. No matter what the Contacts wars lead us to believe, I won’t be trading in my Gmail for Facebook Messages anytime soon and I don’t think anyone expects me too. Besides, Mark Zuckerberg himself referred to Gmail Priority Inbox as “pretty cool.” Not exactly fighting words.

I’m pretty sure the 350 million active Facebook Messages users (most without the new features), 363 million Hotmail users, 303 million Yahoo Mail users, 175 million Twitter users and 171 million Gmail users all have some overlap, each using whatever service is most efficient in each particular use case.

Right now I wouldn’t Facebook message a potential client just like I wouldn’t @reply a relative with the details of what my family is doing for Thanksgiving. But this, like anything else in the volatile realm of human communication, is subject to change.