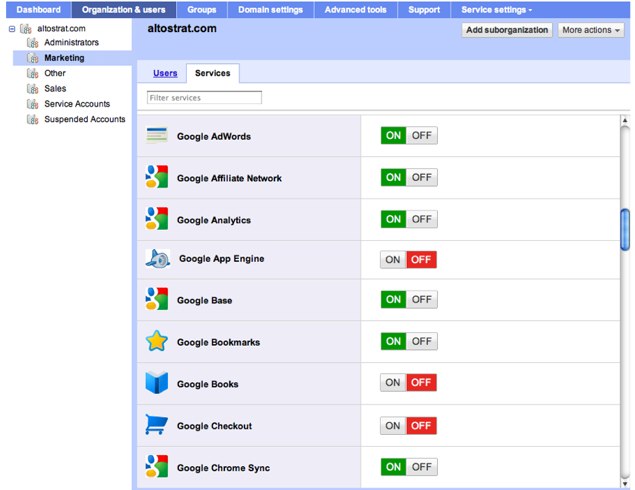 Earlier this year, Google announced that it would be rolling out Apps interactivity with iGoogle, YouTube, Blogger, Picasa, and other products in the Google family. Today the search giant is making over 60 of its homegrown products available for a deep integration for all types of Google Apps accounts.

Services like Google Voice, Reader, Analytics and AdWords will now be available on Google Apps accounts. The apps can be accessed through a new interface in administrative control panel for new customers. Existing customers can transition to the new interface at their own pace but Google says it will automatically shift all App customers over to the new control panel early next year.

Administrators can also regulate which tools certain users or groups have access to within their Apps group. And Google provides access to all of these applications from one account, offering a single sign-in across core suite and other Google applications.

Rajen Sheth, group product manager, Enterprise Apps, tells me that the motive behind the introduction of the products to apps relates to the consumerization of the enterprise. He says that we are seeing that the consumer world can shape business world, and it made sense to bring in the products that consumers are interacting with personally, such as Google Voice, Picasa, Checkout, and Reader; to the Apps interface.

For example, Sheth says that an architect can use the Picasa and Drawings integration to share images and albums with coworkers in a secure environment with added storage capabilities. Or an executive could use Google Voice to us one phone number to ring all phones, access voicemail transcription to SMS, email or web on the go, and be able to store all of this as long as needed.

In conjunction with the announcement, Google is also re-naming all of its versions of Google Apps:

The fact that Google has so many apps that are popular with consumers is a huge win for its App product and the company is wise to integrate all of its products with its enterprise product.