It’s time to meet the latest Zynga game that’s destined to join the ranks of Facebook’s most popular applications: CityVille. It’s SimCity meets FarmVille, and it’s got plenty of competition. CityVille isn’t quite finished yet — Zynga says we can expect it to go live globally in the coming weeks — but I got a chance to see a 45 minute demo, which was enough to get the gist of what users should expect. When it does launch, the game will be internationalized in German, Italian, Spanish and French, which will mark the company’s first global launch.

Zynga’s entry into this genre isn’t a surprise: Digital Chocolate’s Millionaire City has 12.6 million monthly active users, making it one of the top games on Facebook; other competitors include Playfish’s My Empire, Crowdstar’s Hello City, and Playdom’s Social City, along with many others. But despite the fact that it’s joining the fray months after its competition, CityVille is sure to see at least some success, because Zynga will be able to steer players of its existing mega-hits to the game.

So does it look any good? Before I get into that, I should make it perfectly clear that I’m not the sort of person who enjoys FarmVille or FrontierVille — I like my games to involve a bit more strategy and thinking. And, from what I can tell, CityVille comes a little closer to what I’m looking for. It’s no Civilization or SimCity, but this is probably Zynga’s ‘smartest’ game yet.

If you’ve played SimCity or any of the aforementioned social city building games, CityVille will feel pretty intuitive. After firing up the game you’ll be walked through a series of introductory missions the instruct you to lay down roads and plot out your first houses and businesses. As your population grows you’ll see an increasing number of people wandering around your town, and you’ll gradually gain access to new, more impressive looking buildings that will help you evolve your town into a virtual metropolis.

And you can’t just start arranging your city willy-nilly, either. Well, actually you probably can, but if you put some thought into it, you’ll find it grows more quickly. That’s because each building and decorative item you place can affect the value of the area around it. There’s also some basic micromanagment around each business’s supply chain. And from a visual perspective this is Zynga’s best looking game — buildings are rendered as 3D sprites, and you can rotate them depending on where you want to place them (this is the first Zynga game to use 3D). 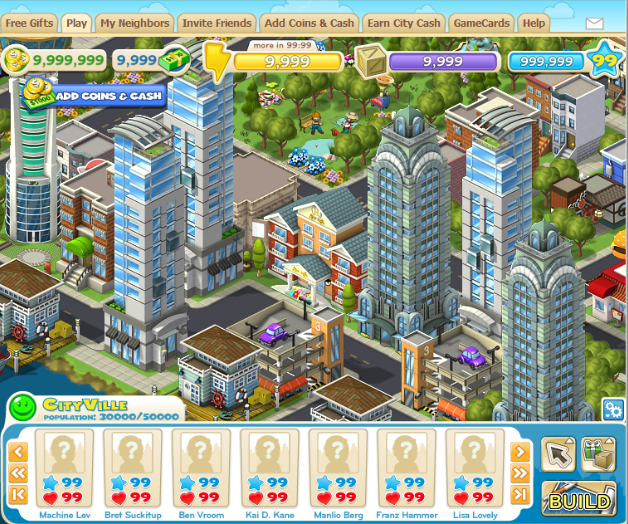 Zynga claims this is their most social game yet. As with Zynga’s other games this social element is still asynchronous (i.e., you aren’t actually playing the game with a friend in real-time). But there are a few additions that boost your interaction with friends. The biggest is the ability to allow a friend to run a business located in your city. They have to ask for permission, but once you’ve granted it, your friend will control that business’s operations. I’m told that they can’t really run the business into the ground (it will still do fine even if they never log in), but if you work with friends who are especially attentive, you’ll benefit more. You can also exchange goods with friends using the game’s transit system, which includes trains and ships.

One interesting point: in FarmVille and most of Zynga’s other popular games, you get punished when you don’t log into the game frequently enough (in FarmVille your plants start to die off). CityVille isn’t employing this kind of punishment mechanic — your city won’t grow as quickly if you aren’t tending to it often, but it doesn’t start falling to shambles over time, either.  That sounds less stressful, but it could possibly lead to less engagement over time. One thing I’ve learned from my experience with other city simulations is that once you’ve achieved a decently high level — enough to access most of the more impressive buildings — the appeal of the game wears off quickly.

But Zynga has a few tricks up its sleeve to keep gamers interested. The biggest is a mission system — from the moment you start playing the game, you’re given tasks to complete. These run from the very basic (build a coffee shop) to much more involved — one story arc involves an archeological dig, which of course requires you to revamp the layout of your city.

One last, completely hilarious, thing to note: Zynga says CityVille will let you uproot trees and plant them somewhere else on your plot of land instead of demolishing them, allowing for a more eco-friendly experience than FrontierVille, which only lets you chop them down. I think they’re serious. 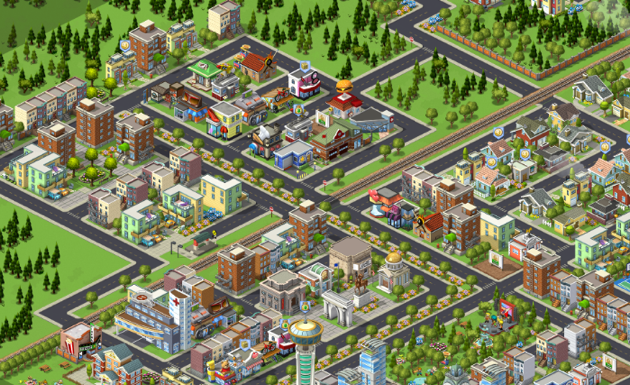