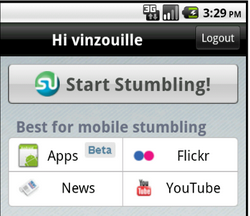 Discovery engine StumbleUpon recently announced App Discovery, a free beta feature of its Android app that basically suggests mobile apps based on a user’s individual interests and preferences and those of friends and like-minded users.

Turns out people love to stumble, even on the go.

Asked if the feature has taken off, the company told me that, in the 2 weeks following its release, they’ve recorded more than 1 million App stumbles already. Considering the fact there are over 100,000 apps for the Android platform at this point, there’s clearly a need for such app discovery services.

StumbleUpon’s Android app not only recommends native applications, but also Web content. The company tells me, already, 25% of all stumbles are for applications, which means the large majority of people still use StumbleUpon the same way they do on their desktops.

Either way, StumbleUpon tells me downloads of its free Android app have soared, doubled even, since the new feature was introduced.

And here are the top 5 most installed Android apps that were discovered by users through StumbleUpon’s App Discovery feature:

– Angry Birds (but of course)

If you’re interested in checking out the app and feature, you should also size up other app discovery services for Android, such as Appsfire and AppAware.