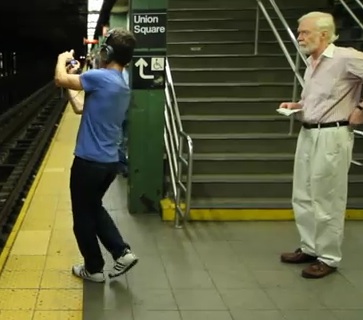 Star Wars and video games go hand-in-hand. There is a long line of Star Wars-themed games going back to the days of arcade games, and continuing through home console and mobile games. Now, the first augmented reality Star Wars game for the iPhone just hit the app store. It is called Star Wars Arcade: Falcon Gunner ($4.99, iTunes link).

The game starts with the scene from the original Star Wars inside the Millennium Falcon after they escape the Death Star and the TIE Fighters attack. You are Luke Skywalker in the gunner’s turret below, and you turn the iPhone to rotate around and shoot the attacking TIE Fighters while Han Solo and Princess Leah either encourage or heckle you depending on your skills. (“Let me guess, you are trying not to hit anyone.”) In the 360-degree background is the Death Star and an earth-like planet, which come into view depending on which way you turn. The game is completely immersive, and works especially well while sitting in a swivel office chair.

The game also has an augmented reality mode which replaces the computer graphics background with your camera view. So you can play in your room or outdoors and the spaceships look like they are coming in from the distance. (see video below, which was taken from the Empire State Building). Be careful doing this in public, otherwise you might become that guy depicted in this other promo video showing what you might look like if you play the game in public. The augmented reality mode is fun to show people, but for pure gameplay I prefer the full-graphics mode. I’ve been playing a pre-release version of the game for a few days. I am not a game guy, but there is a real Wow factor here. 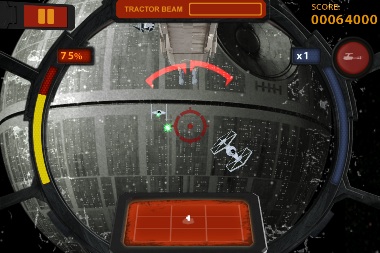 Falcon Gunner is licensed from Lucasfilm and published by THQ Wireless, but it was designed and developed by Vertigore Games, a startup incubated at Futurity Ventures. “It is like bringing Star Wars into your world, which is what a lot of people want to do,” says Edo Segal, the CEO of Futurity. The game is built on top of Vertigore’s immersive game engine, which was also used to build a previous game called Pacific Defense. “We pulled it the second we did the deal with THQ, which has the Star Wars license,” says Segal of Pacific Defense. He and CEO Josh Shabtai wanted to put all of Vertigore’s efforts into the Star Wars game instead. “Having a branded property in a world of 500,000 apps is worth more than however creative we could have become,” says Segal.

Star Wars Arcade is not a two or three-man effort. It took about 30 people, many of them contractors, to build the game. The total development budget ran into the high six figures. That is a lot for an iPhone game. “We are getting to this inflection point where you can put production values into an iPhone game,” says Segal. The entire game was written in C from the ground up, with the 3D models designed specifically with the retina display of the iPhone 4 in mind. Obviously, the game really needs to be a hit for all that expense and effort to pay off, but it could also set a new benchmark for games on the iPhone platform.

An iPad version will come out soon, and Vertigore hopes to create more Star Wars-themed games in the future (hence, the “Arcade” in the name), which will tie together different immersive adventures across the Star Wars universe. Unrelated to Star Wars, Vertigore is also creating immersive iPhone games for Hasbro’s upcoming 3D View-Master.

Up until now augmented reality apps have been nothing more than cool gimmicks. Vertigore wants to popularize 3D-immersive technology by taking it mainstream. Segal sees two approaches: you can go for complex augemenetd reality tricks, or just make it fun to shoot things. He is taking the latter apparaoch