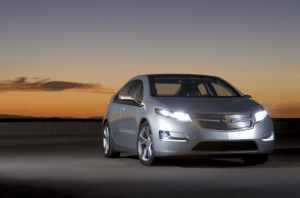 The 102-year-old car company General Motors (GM) is set to go public on Thursday after a government-forced bankruptcy and bailout in November 2008. The bailout cost taxpayers about $50 billion. Analysts estimate the stock price would need to hit $53 dollars before the government can recoup its investment. GM plans to sell about half-a-billion shares for $33 each in its IPO. The company stands to raise an estimated $20.1 billion to $23.1 billion.

In a press statement late Wednesday, The U.S. Treasury Department revealed that it sold 358.5 million shares of GM, raising $11.8 billion, and hanging onto a 37% stake of the company. With underwriters chomping at the bit to buy more GM shares to cover over-allotments, the Treasury could reduce its stake to 33.3% and sell 412 million* GM shares raising a total of $13.6 billion.

The L.A. Times reports that the GM IPO would set a new record:

A $23.1 billion total would surpass not only the record set by the Agricultural Bank of China but also easily break the $19.7 billion record for a U.S. company, set by Visa Inc. in March 2008. However, Visa’s deal was all common stock, leaving it as the largest by that measure.

In other company news, GM unveiled its 2011 Chevrolet Camaro Convertible at the Los Angeles auto show today. Earlier in the week its new, electric vehicle (EV) the 2011 Chevy Volt won the title of car of the year from two trade magazines, Motor Trend, and Automobile magazine.

The Volt is not a pure EV because it has a 1.4 liter gasoline engine-and-generator that produces power and gives mechanical assistance to the motor that drives the car. The gas engine assists the vehicle in situations where a driver has gone more than 40 miles, and is operating at highway speeds around 70 miles per hour company representatives have told several media outlets. That said, the Volt still qualifies for government tax credits provided to EV-buyers, and primarily runs on electricity.

GM reported its 2010 third quarter earnings last week including a net income of $2 billion, and revenue of $34.1 billion. By comparison, Tesla Motors, a Nasdaq-traded company that makes truly all-electric vehicles saw $31.2 million in revenue, but a net loss for the third quarter of 2010 thanks to hefty research and development costs according to its earning reports. Shares in Tesla Motors traded just under $30 ahead of the GM public offering.

*[CORRECTION: In the second paragraph of this story, I mistakenly wrote “more” shares, but should have written 412 million total. The word “more” was removed from the passage on Nov. 18 to correct the story. Thanks to @pbones for bringing this to my attention. – LK]