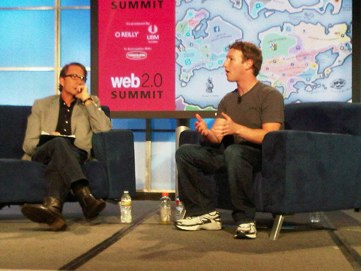 The final speaker during the second day of the Web 2.0 Summit was Facebook CEO Mark Zuckerberg, who was joined on stage by John Battelle and Tim O’Reilly. The scope of the interview was broad — Zuckerberg answered questions about the recent slapfight with Google over contact information; whether or not Facebook was focused on building out its own application or more on the web ecosystem, and much more.

First, one thing to note given how much flack he’s gotten in the past: Zuckerberg did really well on stage. Sure, he had some answers that I’ve heard verbatim at previous Facebook events, but that’s par for the course here.

He also had one insightful comment to make about the Web 2.0 Summit backdrop, which consists of a map charting out the online ‘turf’ that has been claimed by tech companies. “Your map is wrong,” Zuckerberg said. “The biggest part of the map has to be uncharted territory — this map makes it seem like it’s zero-sum, but it’s not. We’re building value, not just taking it away from someone else.”

One topic that the conversation came back to a few times was Facebook’s stance with regard to exporting email contacts (which is what Google has objected to). “I’m not sure we’re 100% right on this.” Zuckerberg said, explaining that it’s a gray area as to whether or not users have the right to export their friends’ email addresses. He contends that Facebook’s decision to block users from exporting their contacts has more to do with user rights and their expectation of control than it does with Facebook’s competition with Google. Of course, as our comments remind us, Facebook is happy to let Hotmail and Yahoo Mail import these email addresses (Facebook has a deal with both of them, but Google won’t agree to one).

The conversation also turned to Facebook’s habit of asking for forgiveness rather than permission. Zuckerberg didn’t really address this directly, choosing instead to discuss the value of the relationship between people who have deemed each other friends. Yes, it’s possible to tag someone in a bad photo or add them to spammy groups, but the user made the decision to add this person as their friend, which confers that power to them. The answer Zuckberberg can’t say: pushing the limits without asking for permission is what allowed Facebook to grow this much, this quickly.

Regarding Facebook’s sometimes-controversial policies, Tim O’Reilly actually took Zuckerberg’s side: “It’s a tough position and I think the approach you’re taking is right. Figure out where the boundaries are now, because if we set rules too early we won’t figure it out, ever.”

Asked about Facebook’s long term vision, Zuckerberg says that Facebook will be an “enabler” for many companies that will disrupt verticals by introducing social functionality over the next five years. And while Facebook will continue to build its own products (which have drawn criticism for being copycats and steaming over startups), Zuckerberg claims that the company only wants to work on products that it views are being core to the social experience.

Zuckerberg also had an explanation for why the company had not partnered with Apple to let it pull in social data for Ping. He says that Facebook has had to invest tens of millions of dollars into infrastructure to enable games from large developers like Zynga, which is why Facebook and Zynga agreed to a formal alliance. Zuckerberg says that if the company is going to make an investment like this, “we want to have an understanding that you won’t just import our data — and that you try to contribute back. We’re working through that.”

Obviously there’s more to it than that — I doubt Steve Jobs would have said Facebook requested “onerous terms” if it had only been for infrastructure costs.