Last but not least, Microsoft has struck a partnership with social games publisher CrowdStar to bring some of its most popular titles to Microsoft’s various casual games properties.

“MSN Games, Windows Live Messenger and Bing reach millions of consumers every month, and we’re connecting all those players — and their social circles — for the first time with a great games experience at the center.”

Launching later this afternoon, the latest addition to the company’s casual games portfolio is a preview of the new MSN Games, which lets Internet users play games online and challenge their Facebook and Windows Live friends to beat their high scores in a centralized environment. The new MSN Games site will sport a new design and also feature “real-time entertainment news” from MSN Entertainment.

With this week’s releases, Microsoft is tying its casual games properties together in a bid to establish a unified games experience across MSN Games, Windows Live Messenger and Bing. All three games properties are connected by a new social feature called Microsoft Game Hub, which essentially aims to add “more of your personality and friends” to your favorite casual games (based on your Facebook and/or Windows Live profile). 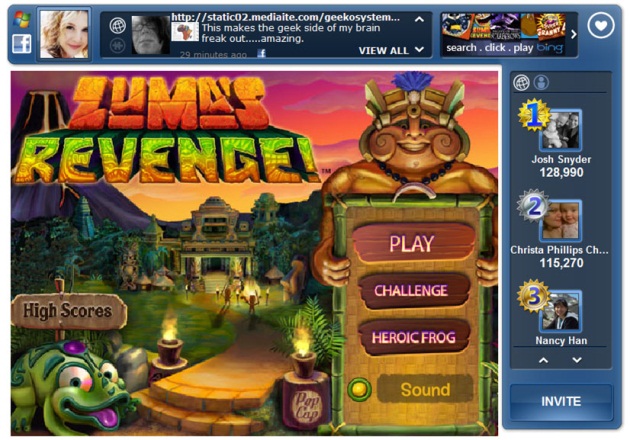 Note that this hasn’t anything to do with the similarly named Windows Phone’s Games hub, at least not as far as I can tell based on today’s announcements.

Microsoft hopes the announcements will resonate with game developers and publishers alike.

“The Microsoft Game Hub is really breaking new ground because that one wrapper instantly makes everything immediately socia.“What that means to publishers is that they write it once, and then publish to any location.”

In addition to the above initiatives, Microsoft announced that Bing Games is henceforth available for users outside the United States in other English-speaking markets such as Australia, Canada, the UK and New Zealand. Already, Bing Games has seen more than 55 million game sessions played to date directly in the browser, the company adds.

Bing will also be the first of Microsoft’s casual games platforms to feature CrowdStar titles, which will join the Bing portfolio in mid-December. The Facebook games maker says it is currently seeing about 50 million monthly active users.

Microsoft points out that Windows Live Messenger remains one of the world’s most popular IM networks, with more than 9 billion messages sent every day. Today, the company is infusing those IM chats with the social features of the new Microsoft Game Hub and a portfolio of titles from publishers like iWin, PopCap, Arkadium, GameHouse and others. 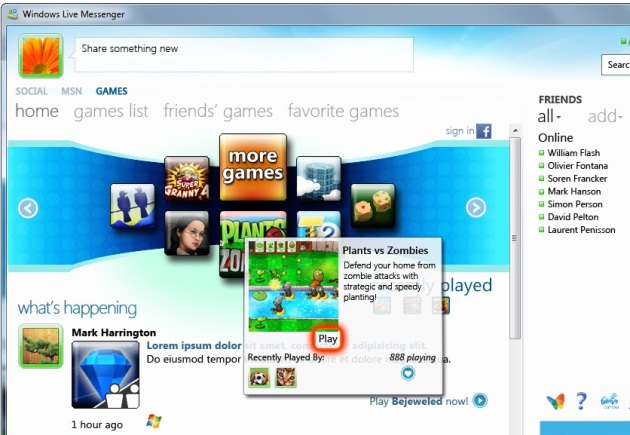 The new games tab in Messenger will be available later today in the US, UK, France, Canada, Spain, Mexico, Brazil, Italy, Germany, the Netherlands, and Turkey. Microsoft says more markets will be added later this year, and that while the games tab UI will be localized in all of these markets, the games themselves will only be in English.

At launch, more than 35 games will be connected and playable across MSN Games, Windows Live Messenger and Bing, including iFresh Games’ “Cubis 2” and PopCap’s “Plants vs. Zombies”.

Microsoft adds that it will round out its portfolio with more publishers and a “carefully-chosen selection of popular and critically acclaimed games from console, handheld, mobile and online platforms” in the future.

As a reminder, we reported back in July that Google is plotting the launch of Google Games and has invested over $100 million in social games juggernaut Zynga (which also has a partnership with Yahoo in place).

It’s safe to conclude we can expect this market to heat up some more as the Web giants continue to intensify their casual gaming efforts.