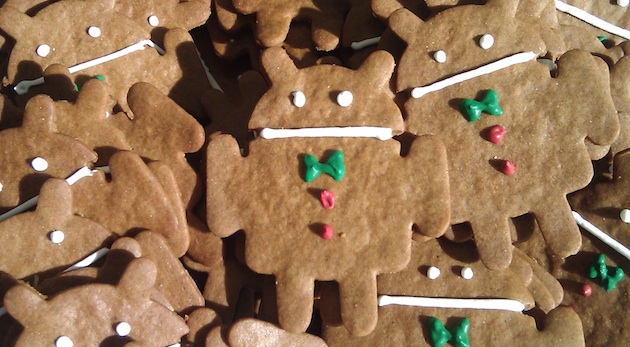 I know, I know. The indications were that the next version of Android, 2.3, was supposed to be out already. It has been nearly a week since an OHA member tweeted that the Nexus One would be getting the Gingerbread OTA update in “the next few days“. So far, nothing. But Google is doing their best to keep whetting everyones’ appetite.

Yesterday, the search giant sent out a tweet from their mobile account (yes, the one they paid to promote on Twitter two days ago). The tweet read, “Our cafes are baking something sweet”, and contained a link to a TwitPic of dozens of gingerbread Android cookies. Cute Google, cute.

It’s been three weeks since Google put the giant Gingerbread Man on their lawn.

By the way, the metadata on the picture shows that it was taken with a Nexus One (and not the mythical — and delayed — Nexus S). No word on if it was powered by Gingerbread.

Perhaps Google is just timing the launch of Gingerbread to take some of the wind out of Facebook’s sails. After all, the social network is set to launch their email-killer on Monday.