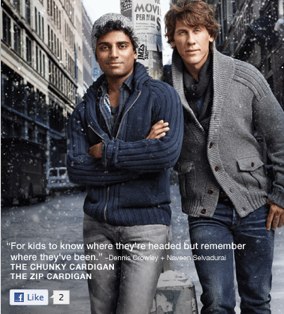 We heard that Foursquare founders Dennis Crowley and Naveen Selvadurai were going to star in a Gap ad and it looks like the final product is out. You can watch the video here.

The videos addresses the question-“if you could give anything in the world, what would it be?” Gap says that in Crowley and Selvadurai’s appearance, the founders chose to give to Camp Interactive, which is an organization that empowers inner-city youth through the inspiration of the outdoors and the creative power of technology.

Other celebs that are featured in the ad include Model and co-founder of FEED Projects, Lauren Bush; and True Blood’s Ryan Kwanten

Gap is also using the videos and Facebook to raise money. All the videos of the celebs featured in the ads will be available on Gap’s Facebook page. For every “Like” a video receives on Facebook , $1 will be donated to the charitable organization featured in the video, up to $150,000. Plus, each time someone “Likes” a video, Gap will give users 30% off one regularly priced item.