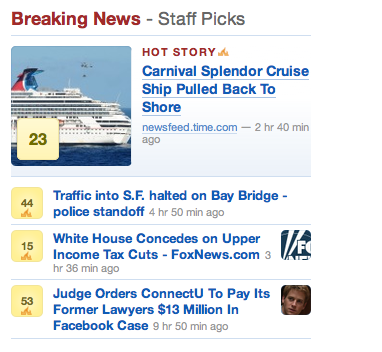 In a pivot away from the “voice of the crowd” philosophy central to Digg’s early culture, the social news site has launched a human curated feature called “Breaking News” which spotlights top stories selected by Digg staff.

As of today you can find Breaking News in red widgets labeled “Breaking News” to the right of the Upcoming, My News, and Top News sections on the new Digg.  Breaking News stories are also designated by flame icons.

This is yet another large news aggregator experimenting with human editors,  Google News and Techmeme being the most visible news sites to make the jump into human curation thus far.  And similar to Google’s “Editors’ Picks” the widget will highlight stories deemed important but not replace the core news surfacing features of the site. Says Digg Product Lead Keval Desai, “There is no change to how the stories are submitted. Digging and burying are not done by Digg employees.”

So what criteria will the editors be using to deem a story Breaking News? Says Desai, “The widget will showcase stories that are submitted by Digg users that are currently hot, i.e. gaining in velocity on Digg as well as what’s going on across the Internet and what’s gaining in popularity in terms of news memes.”

It’s commonly acknowledged that aggregators like Reddit, Hacker News and even Digg have had at least some administrative supervision (like TOS enforcements). Digg itself faced accusations of manually intervening on behalf of certain publishers in early October. Desai says this is the first time any Digg staff will put a concerted effort into picking stories for editorial reasons.

This is a great idea, but it might be two years too late. Says Power Digger Andy Sorcini a.k.a Mr. Babyman on whether the feature will at least revive some interest in the new Digg, “I think it’s a smart move for Digg to meta-curate their already curated content. Especially in the wake of the drop of traffic from the switch to V4, they need all the help with content surfacing they can get.”

Not all attempts at human curated news have been successful however. Breaking News resembles what Jason Calacanis attempted with Digg clone Propeller, which ultimately failed despite its novel editorial oversight features in part because it confused people accustomed to the classic Netscape.com. While human editing does make a news engine more competitive with Twitter and younger upstarts like BuzzFeed and Spotery, it is not a panacea and comes with its own set of headaches.

Says Sorcini, “The only concern I would have is, It’d be nice to have some sort of transparency on their selection process, so users know there’s no slant (for example, favoring a advertising partner, such as BP).” And so it begins.