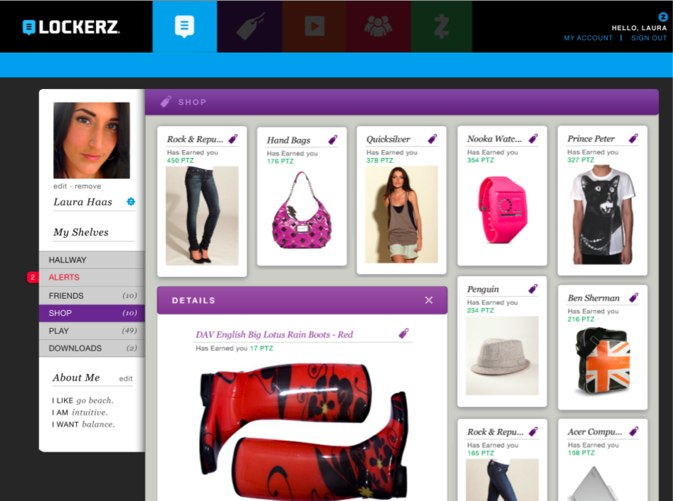 While social commerce network Lockerz has been flying under the radar, the startup has quietly been able to raise an impressive amount of funding and accumulated nearly 18 million members after being open to the public for under two years. Lockerz has raised a total of $30 million, most recently nabbing $18 million from Kleiner Perkins newly launched sFund. Both John Doerr and Bing Gordon sit on Lockerz board of directors.

The Lockerz social commerce platform revolves around the idea that influencers within a social network can become brand and content advocates and affect the behavior of their friends. Lockerz is primarily targeted towards men and women ages 13 to 30, attempting to build a community of trendsetters and tastemakers who love to shop, play and connect on the Web.

Lockerz provides incentives like the ability to earn discounts on brands to encourage users to share content on the site. Members earn “Pointz” by watching videos, listening to music and inviting friends; pointz can then be used lower the prices of merchandise on the site. Users can also earn “Decalz” for sharing (similar to badges). New boutiques launch every Tuesday and feature brands such as 7 for All Mankind, Alex & Ani, Splendid, Rock & Republic, Matt Bernson, Quiksilver, Nintendo, and Xbox 360.

Founded by Kathy Savitt, a former Amazon and American Eagle Outfitters exec; Lockerz eventually wants to be the go-to commerce homepage for teens and young adults. One interesting part of the startup’s social growth is that it has no connection to Facebook. Savitt says that they are looking into connecting with Facebook, perhaps through a Facebook app, but that growth seems to be doing just fine with out the social network.

Lockerz started with 50 college kids that were friends and family of Savitt and her two daughters, and grew to 17.5 million users in less than one year. The site gets a little under 1 million unique visits per day (according to Google Analytics).

Social commerce is certainly hot these days, with social networks and commerce sites all throwing their hat in the ring with various products and acquisitions. But Lockerz has been able to gain a viral following from a subset of users, which is impressive. It should be interesting to see if the startup can continue its ascent.