Last night Internet darling Conan O’Brien triumphantly returned to television for the first time since his infamous skirmish with NBC earlier this year. While introducing the winner of the online “Conan’s First Guest” poll, Conan started to do an impression of the kind of people who vote online (read: smartphone twiddling nerds), stopping mid sentence to state truthfully, “Wait a minute, those people saved my ass …”

Indeed, 4.2 million people watched last night’s TBS episode beating out viewers who watched Jay Leno on NBC by 700K. It’s probably safe to say that quite a few of those people were on Team Coco, the official name for Conan’s legions of online fans.

According to Talkwit.tv, a recently launched service that ranks shows based on frequency of comments on Twitter and Facebook, Conan was the #1 “most social show” of last night, clocking in at 27,522 related comments on the social services. At #2 was NFL Football with 24,244 comments.

And while Talkwit.tv would not give me the actual breakdown, they did say most of the Conan related comments came from Twitter, where the social media favorite has 1,836,471 followers.

I’ve included a really poor quality screen capture of the 40 seconds of dialogue above. You can watch the rest of the pretty hilarious episode below or at TBS.com. 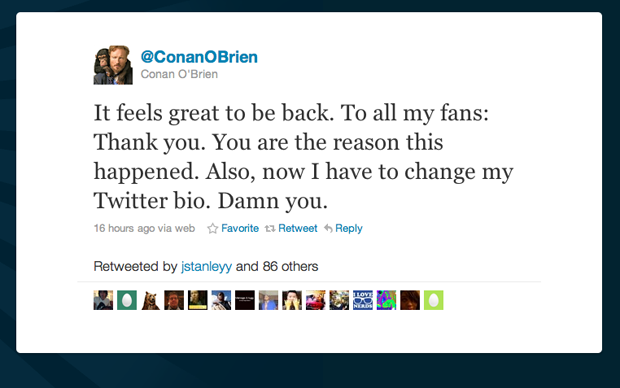