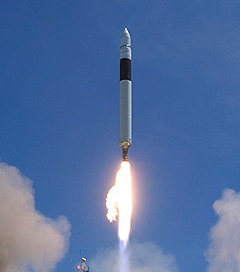 Investors just love to give money to Elon Musk. The billionaire behind electric car manufacturer Tesla Motors, which has raised more than $800 million to date, just raised another $50 million for his other swing-for-the-fences company, SpaceX. According to an SEC filing, SpaceX raised $50.2 million on October 28. Jay Yarrow at Silicon Alley Insider first reported the funding, which came from existing investors. (Musk, Draper Fisher Jurvetson, and the Founders Fund are the biggest investors).

This latest funding brings the total capital put into SpaceX to $200 million, which is a lot for a startup, but really not that much for building a rocket company. Many billions have been wasted on efforts to get to space more cheaply than currently possible. And it’s only a quarter of the capital investors have put into Musk’s electric car venture.

With NASA looking for an alternative to the aging Space Shuttle, maybe investors think that SpaceX has a shot at some of that business, especially supplying the International Space Station and future missions. There is no proven business model in space other than government contracts and low-earth-orbit satellite launches. Going after new markets in space is definitely a long-term play, and my guess is that it is going to take many more infusions of capital to get to where Musk wants to go.

Correction: SpaceX already has a $1.6 billion contract with NASA to supply the space station, among other projects. It also has several large commercial deals in the works worth hundreds of millions of dollars and claims to be slightly profitable.