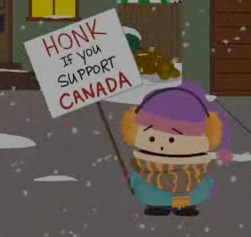 Every once in a while we like to post a reader email (or a PR email) and respond directly here on TechCrunch. This week’s email comes to us from Kevin, who lives somewhere in Canada.

I was just thinking that Canada needs a technology news outlet and saw that you have set up operations in Japan and Europe (including France). I would love to see a TechCrunch Canada. Although we are neighbours to the U.S. Our technology scene is very distinct. At the centre of Canada’s tech sector is Ontario where Ottawa, aka Silicon Valley North, is an international tech R&D site and Waterloo is the headquarters of Research In Motion. Between Ottawa, Waterloo and Toronto there is a pretty big tech start-up scene.

I’ve attached some links about Canada’s tech sector for your information:

First, Canada just doesn’t like us, and we can’t stop laughing at Canada. See Canada Now Somewhat Less Anti-Startup, Canadians Unite To Fight Off The “Feared TechCrunch”, More Proof That Canada Hates The Environment and I’ll Never Let Canada Live This Down.

Second, we were acquired by AOL, which stands for “America Online.” Everyone knows “America” technically includes Canada, I guess, but the clear intention was the United States.

Third, I have lived in Ottawa and it is as cold as hell there. Ridiculously, utterly freezing. I like Tim Hortons, the Barenaked Ladies and Poutine as much as Canadians do (well, probably not). And I’m certainly a big fan of saying I’m Canadian when traveling somewhere that may not be super amenable to U.S. visitors. But I draw the line there. Canada is simply too cold for TechCrunch.

Fifth, I’m pretty sure your army guys still ride horses. That’s not very technically savvy and indicates that you are all luddites.

Sixth, You are actually in a territorial dispute with Denmark, the Canada of Europe (yes, I’ve also lived there), over Hans Island, a “small, uninhabited barren knoll measuring 1.3 km” off the coast of Greenland. In one particularly passionate moment you actually engaged in a Google fight over ownership. I think you need to up the ante a little. Send the guys on horses, I say, and take that island by force from the Danes. If you do, I erase all debts and will embrace Canada with all of our TechCrunch love. And Poutine for everyone on me, eh?