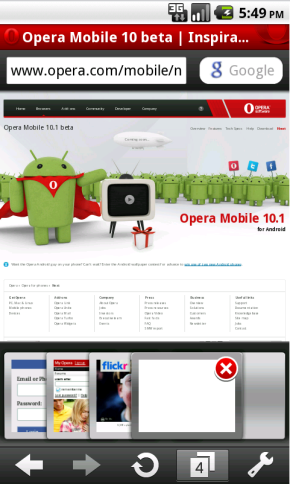 Yes, Opera was already available for Android, in a fairly limited way. Opera Mini, has been live on the market since July, but now you can also download the company’s full-fledged browser, Opera Mobile, from the application store.

– smooth scrolling, zooming and panning (rather than having to tap to zoom in, which is definitely a huge improvement)

– Ability to sync bookmarks across devices

As I had mentioned earlier, the release of the public beta version of Opera Mobile for Android was just a matter of time, as the product already existed, albeit for the Norwegian company’s OEM partners only.

Now that it’s available for direct download for end users, you’d be wrong not to check it out.

Fellow TechCrunch writer Jason Kincaid installed a build of the app on his Android smartphone this morning and confirmed that it feels snappier than the native browser that came installed on it. Obviously, more robust side-by-side testing is welcome here.