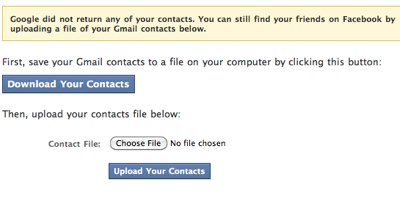 That huge sucking sound you hear is Facebook, piling data from third parties into its mouth as fast as it can while it remains stubbornly greedy about releasing its own data to anyone it doesn’t like. Which is mostly Google these days, since Yahoo and AOL completely surrendered and Microsoft actually owns part of them.

Google shut them down last week, restricting API access and effectively blocking contacts exports to Facebook in any automated way. This is, I wrote, the true beginning of data protectionism.

Now Facebook has found a way around that restriction. They’re leveraging a Google feature that lets users download their own data for their own use – part of Google’s golf-clap worthy data liberation effort. They’ve hacked a solution around the block by giving users a direct deep link to the download feature. And then users can upload that file directly to Facebook.

Can Google block this? One engineer I spoke with says yes, but it will be difficult: “If Google wanted to, they could block it immediately. it’s pretty simple. just put a CSRF token on the url to block deep linking but that might fuck up other CSV flows. Maybe they have an outlook importer or something. facebook really went aggressive here.”