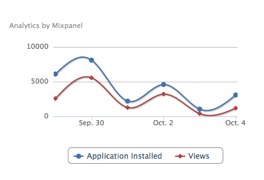 We’re big fans of Mixpanel, an analytics-focused startup whose backers include Y Combinator, Michael Birch, and Max Levchin. The startup, which tracks over 1 billion actions per month, allows developers to track a variety of user actions, including the number of pages a user has viewed, iPhone app analytics, interactions on Facebook apps and email analytics. Today, the startup is allowing developers and businesses to offer MixPanel’s analytics to their customers.

The MixPanel Platform essentially gives websites a plug and play analytics offering for their users. Developers insert a few lines of code, and then users can access MixPanel’s variety of realtime analytics for their services. The platform offers the ability to track how many comments, subscribers, likes, shares, and page views users are getting. MixPanel will place all of this data on a dashboard for a business’ users to check and monitor.