Back in September we wrote about Memolane, a semi-stealthy startup that had raised $2 million to help “rediscover your social life on the Internet”, but wouldn’t give us much details as to what they were actually up to. Today, the company is ready for its public debut.

Right now, your online presence is scattered across a lot of sites. This has been true for years, and it’s a problem that’s also spawned plenty of startups, including Friendfeed. Memolane is the latest from this breed of startups, but it’s taking an approach that’s a bit different from most social aggregators: it’s all about telling stories. The site will display your online history in an interactive timeline, and it will also let you collaborate with friends to tell a story using your tweets, photos, videos, music, and more. The best way to really experience the site is to browse a timeline: check this one out.

Unfortunately the site is still in an invite-only beta, so you won’t be able to sign up just yet.  When you do though, getting set up on Memolane is pretty straightforward — after creating an account, you’ll be prompted to connect to various services across the web, including Facebook, Twitter, Flickr, YouTube, and Vimeo. These services are all accessed via OAuth, so Memolane isn’t holding on to your passwords. 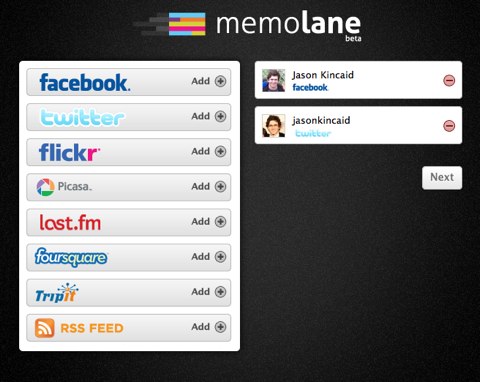 Once you’ve hooked up your accounts, Memolane will pull in all of your content and generate a comprehensive (and very slick-looking) timeline. Content that was submitted on the same day is displayed vertically, and you can skim through time by scrolling horizontally. There’s also a timeline at the very bottom of the page that will let you jump months or years back in time (it reminds me a bit of Apple’s Time Machine interface). Memolane builds this timeline instantly, and most of the time it won’t store your personal data on its server (it does store tweets, but everything else is fetched via the appropriate service’s API).

But Memolane isn’t just about looking at your own content. The site also lets you create stories by hand-picking certain pieces of content from multiple accounts and piecing them together. Say, for example, you went to Yosemite with a handful of friends. Memolane would let you invite each of these friends to a shared story timeline; once they’ve been invited, they can add tweets, music they’ve listened to, video recordings, and other content  related to the trip from their personal Memolane timelines. Then you can send these stories to family and friends, who don’t need to have an account to view them.

Memolane is hardly the first startup that can visualize your shared content on a timeline – also see Dipity, iStreamer, and others. But founder Eric Lagier says that it has some key differences — namely the fact that Memolane is based on HTML5, while the biggest competitor, Dipity, (Update: Dipity is HTML as well). And he stresses that the site is all about keeping things simple.

Memolane first originated as part of a Startup Weekend event in April, where Eric Lagier conceived of the idea and rounded up a team of other attendees to build a prototype. From there, things picked up fast — Lagier quit his job and sought funding. The company’s investors represent a Skype reunion of sorts: they include Skype founders Niklas Zennstrom and Janus Friis, as well as August Capital’s Howard Hartenbaum (who was the first investor in Skype). And Memolane founder Eric Lagier ran Skype’s mobile products during the company’s early days. 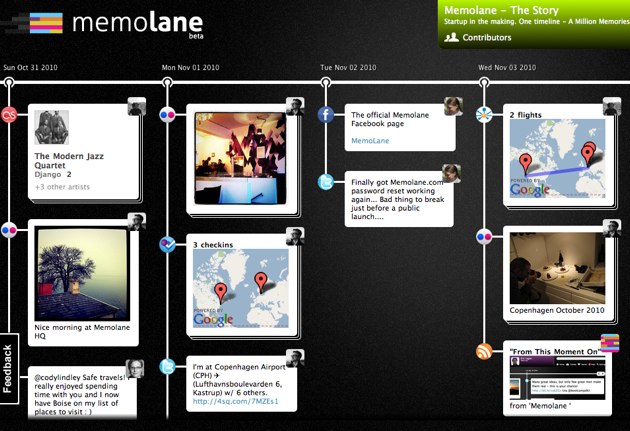