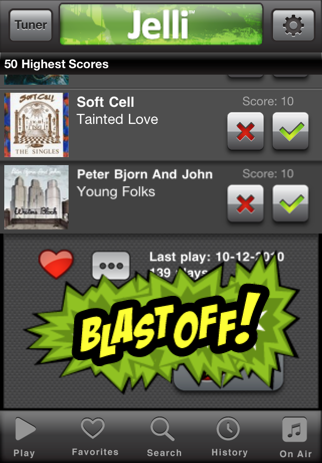 Jelli, a startup that’s a mix between Pandora and Digg (with old-school terrestrial radio stations thrown in), has gone mobile: the company has just launched a native iPhone application. Now, this wouldn’t be especially interesting news (who doesn’t have an iPhone app these days?), but it fills in one major gap in Jelli’s functionality. Because while the service has been around for a while, there’s never been a good way to use Jelli on the go — and, as the folks over at Pandora can tell you, that mobile experience is key when it comes to streaming music. You can download the new iPhone app right here.

For those that haven’t used it, Jelli gives users the ability to listen to — and help control — crowdsourced radio stations. Users get to choose from a library of songs available on a given station (if you’re listening to a pop station you probably aren’t going to see Metallica as an option, but there will be hundreds of other choices). Songs are displayed in a list based on the order they’re going to play, but users can quickly adjust the order by voting (Digg-style) or employing special powerups.

Every day users are given a handful of ‘rockets’ and ‘bombs’: use a Rocket on a song that’s toward the bottom of the playlist and it will shoot toward the top; use a bomb and you’ll knock off a song that was going to play soon. These sound effects are actually part of the radio broadcast (if enough people don’t like a song you’ll hear it “explode” mid-stream and the next song will start playing).

The service was initially online-only, but it’s now branching out to strike deals with terrestrial radio stations, which still have 239 million listeners a week in the United States (you may not listen to ‘old school’ radio any more, but plenty of people still do).  The company is up to over 20 station partnerships, with more in the works.

Now, Jelli doesn’t take over these radio stations entirely — instead, it offers them a server box that they hook up to their radio tower for a few hours (or more) per day. That server box is linked to the web, which lets listeners vote on which songs they want to hear next. For the radio station, the whole thing is pretty hands off, which is one reason why it’s appealing.

Obviously it’s been possible to listen to these terrestrial radio stations without Jelli’s iPhone app (you could just hit the FM button in your car) but until now you’d only be able to interact with Jelli’s voting system via a computer. And that presents a problem, because people primarily listen to radio while they’re on the go. The iPhone app fixes this; it lets users vote up songs that they want to listen to, both for terrestrial stations that are using Jelli and online-only streaming radio stations that run 24/7.

Jelli still has a long road ahead, both of dealing with existing radio stations, and, eventually, launching standalone Jelli broadcasts of its own (it’s talking about having terrestrial, 24/7 Jelli stations one day). The company has raised a total of $7 million, including a $5 million round earlier this year.