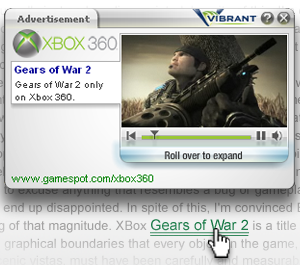 You know those double-underscored links in articles and whatnot that open up advertising units when you hover over them? It’s a form of digital advertising dubbed in-text advertising, and it personally drives me insane.

Don’t tell Vibrant Media that though.

Widely considered one of the leaders in this space, the company goes out of its way to tout the high click-through and effectiveness rates of in-text advertising. The company is even known to cite studies that basically show everyone just loves in-text ads for their relevancy and tremendous visual appeal.

I’m sure I’m not the only one that dislikes in-text advertising with a passion regardless, but Vibrant is clearly doing something right from a business perspective: they’re unequivocally growing like crazy and considering hitting the public markets soon, TechCrunch has learned.

The NYC-based contextual advertising company’s founding CEO, Doug Stevenson, told M&A news service Mergermarket that Vibrant Media has “all the elements in place” for a public offering “if it were deemed appropriate”, and is currently in the midst of sizing up companies for acquisitions of their own.

The company’s reportedly interested in hearing from financial advisers in the space regarding its acquisition strategy, but not for a potential liquidation event down the line.

Stevenson says they already know the bankers they’d want to select for underwriting an IPO, and that they’re “happy with the shortlist”.

Recently, Vibrant Media hired a new chief financial officer: Jeff Babka. And the company was quick to point to me just how much experience Babka has when it comes to IPOs – he took NeuStar public back in 2005 and, as CFO at Sophos, put the IT security firm on track for an IPO (the company was eventually sold to Apax Partners for $830 million last May).

All this may be Vibrant simply fishing for potential M&A candidates – it’s a well-known strategy to float the possibility of going public to incite interest from potential buyers – but the numbers do add up.

Founded over 10 years ago, Vibrant is debt-free and on track to record over $100 million in revenues. Stevenson says the 250-person company has been profitable for “a long time”.

To date, Vibrant has raised roughly $27 million in funding, and says it has no plans for an additional venture capital raise.

Additionally, the company is also looking for interesting acquisition targets, across these three categories: pure-content companies, ad technology companies and advertising networks in other regions, primarily in countries such as Japan and Brazil.

From the horse’s (read: Stevenson’s) mouth:

Associated Content was acquired by Yahoo for a reported $90 million in May 2010.

To conclude: it wouldn’t be wrong to expect Vibrant Media to pick up some companies left and right in the near future, get acquired or file for an IPO.

Either way, in-text advertising is here to stay and annoy me.