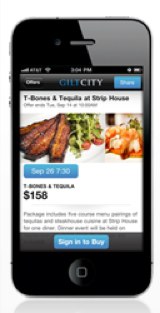 Since its launch earlier this year, Gilt City has been a somewhat reluctant competitor to daily deal juggernaut Groupon. Although their business models overlap— with both offering local deals for a limited time— Gilt says it purposefully goes after a different demographic.

In line with Gilt’s larger mission to cater to a luxury lifestyle, City was designed to target a more high-end clientele, versus, Groupon which has more of a mass market appeal. But that line of demarcation hasn’t been as cut and dry. In a recent survey of Gilt City consumers, Gilt came to four basic conclusions, which they exclusively first shared with TechCrunch:

•  74% of respondents were satisfied or very satisfied with their experience

•  91% told 2 or more friends about their experience Gilt City

As evidenced by the results, Gilt achieves high marks for consumer loyalty, satisfaction and reach, with each metric scoring above 70. But, when it comes to brand perception, only 57% of users thought the City service was “more unique” or “luxury oriented” than other daily deal/social buying sites. One could argue that this is a case of half-empty or half-full. Indeed, a Gilt representative said the number was proof that City projected a more “covetable lifestyle.”

However, for all of Gilt’s dominance on the luxury flash sales side (i.e. its flagship women’s retail sales pipeline), my bet is that the company was hoping to score higher than roughly half, or 57%. Of all the boxes on the survey, brand perception should have been an easy home run for the retailer, which is on track to hit roughly $500 million in revenues this year.

With more than 1 million subscribers and just 7 months old, Gilt City is no failure.

On the contrary, the service has done very well in attracting new users and offering luxury deals, like spa packages with free jet rides and discounted gourmet dinners. According to Gilt, City is their fastest growing vertical, ahead of children and home. But, as the results indicate, there does seem to be something off with the pitch and how Gilt orchestrates buzz around its City deals. The site will have to work harder to crawl out of Groupon’s shadows (which also frequently offers spa packages and gourmet dinners), differentiate its offerings and build legitimate excitement around the City brand, the way they’ve been able to execute on women’s and men’s apparel. Perhaps its in the formula, the marketing, the pricing, the structure of the deal (for example the lack of time sensitivity, as deals can be open for days), but it’s missing that awe factor— the intangible feeling of got-to-buy-it-now.

Last month, the company made its first acquisition for Gilt City: Bergine, a SF-based luxury group buying site. Gilt’s new CEO, Kevin Ryan, told us that the company made the acquisition to expand its footprint on the West Coast and bring Bergine’s executive team on board. When asked whether this would be the beginning in a long line of regional acquisitions— in the same vein as Groupon— Ryan said no, Gilt will make acquisitions as they make sense but this is not the first step in a global shopping spree.  That’s good news, because as the survey says, geography is not Gilt’s first problem. 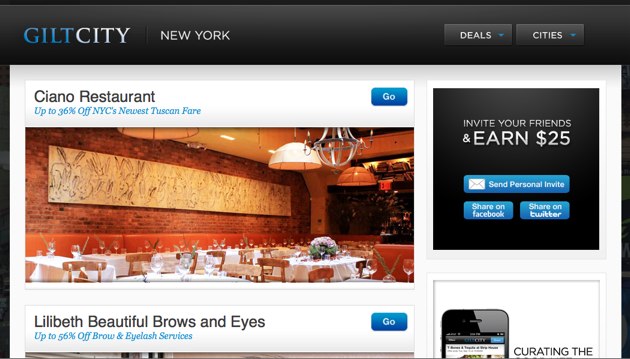