Earlier this year Huddle, a UK-based company that offers collaborative workspaces as a service, closed a $10.2 million funding round. And it’s putting that money to work: it’s tripled its engineering staff over the last few months, and its overall headcount has jumped from 25 to 60 spread between London and a new San Francisco office. Today, we’re going to see the first fruits of this growth.

Unfortunately it’s not a feature that sounds especially sexy — Huddle is launching a totally reworked task manager. But while it may lack a ‘Wow’ factor, Huddle says that the new functionality is a big step forward for the company (and that it’s only the first of several upcoming product relaunches).

So what exactly does the new task manager bring to the table? Cofounder Andy McLoughlin says that up until now, Huddle’s task manager has left a lot to be desired — it was really basic, without any way to associate content with a task (for example, you couldn’t associate a Word doc with a task called “Read This”). Likewise, there wasn’t a way to filter tasks, nor could you export, or assign them.

The new version fixes all of these issues.  McLoughlin says that the company is aiming to offer more functionality then you’ll find in 37Signal’s Basecamp, but with less complexity than Microsoft’s SharePoint and Project, and he thinks that this Task relaunch is in line with that mission. In addition to new features, Huddle is using an overhauled UI, which McLoughlin says should make managing tasks easier.

This is the first of several major launches that Huddle has on the drawing board. Over the last several months it has been investing heavily in its product, rewriting the core platform and building out its APIs. In the coming months  it says we’ll be seeing a series of relaunches of its core features.

Huddle was founded in 2006 and has since landed some big deals, including one that has it bundled with millions of new HP Business PCs. More recently, Huddle was integrated into Xobni, the Microsoft Outlook plugin. 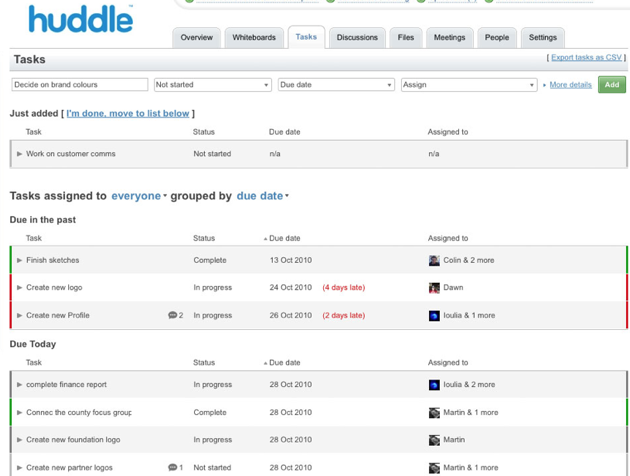 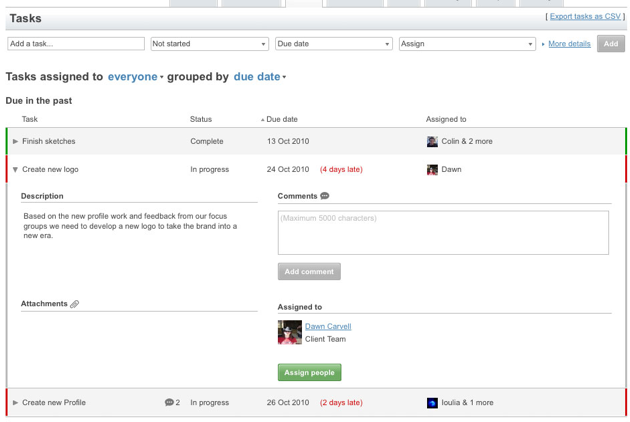