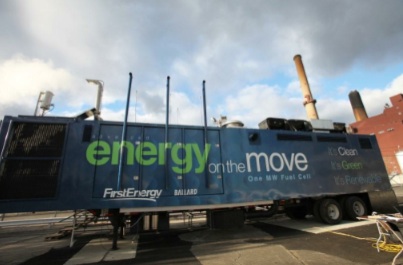 FirstEnergy and Ballard Power Systems are introducing a portable fuel cell that is scalable and is designed to take demand off the power grid.

While fuel cells have been powering manned spacecraft since the Gemini V mission in August 1965, their use here on Earth has been rather limited. But that’s slowly changing. The Japanese are building fuel cells into homes, for instance.

But Akron, Ohio based FirstEnergy Corp. wants to use large fuel cells to supplement power generation. Its tractor-trailer sized fuel cell is the world’s largest mobile system that’s been deployed to date. It’s supposed to ease the energy demand during the hot, summer months when FirstEnergy’s power grid is under the most pressure.

The fuel cell was purchased from Ballard Power Systems. The one-megawatt, hydrogen-powered fuel cell, also known as a proton exchange membrane fuel cell, can power 500 homes. Situated at a coal power plant in Eastlake, Ohio, the 54-foot PEM fuel cell is expected to handle peak loads from May through September.

Fuel cells don’t run out of power like batteries do. As long as a fuel source such as hydorgen gas is supplied, hydrogen and oxygen can produce water and heat to power homes.

“This is a demonstration project. But if it works, it will be easy to scale up,” said FirstEnergy spokesperson Mark Durbin. The nine fuel cell system will be tested over the next five years, which is enough time to see how it performs in the real world

FirstEnergy’s proton exchange membrane (PEM) fuel cell is different from other cells, such as those produced by Bloom Energy.

Also, Bloom Energy’s $800,000 portable power plants, nicknamed Bloom Boxes, are only the size of industrial refrigerators. And it only takes a single 100 kilo-watt unit to power 100 homes or a 30,000 square-foot office building.

Bloom Boxes are better suited to satisfy corporate needs rather than those of utilities. Bloom Energy recently sold its boxes to major companies like Google, eBay and Walmart.