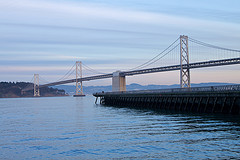 Groups that sought to postpone air pollution controls in California lost at the polls on Tuesday. An estimated 61 percent of California’s voters said no to proposition 23, and yes to keeping the Global Warming Solutions Act of 2006, Assembly Bill 32 (AB 32) on schedule. The laws aim to cut the state’s industrial carbon dioxide (CO2) emissions back down to 1990 levels by the year 2020 and are slated to take effect in early 2012.

What does AB32 mean for businesses in California and the U.S.?

A principal with the global, economic research firm The Brattle Group, Jurgen Weiss said that AB32 and the changes it brings to the Golden State’s economy would not be problematic for a majority of traditional small businesses (and early stage startups) there.

The Brattle Group researchers project that by 2020 a restaurant in California will probably have to increase its prices from $50 to $50.07 due to AB32 effects on the cost of energy and goods, locally. Weiss explained, “The levels of impact will be minor for small businesses and early stage startups, generally. That’s because [most of these] aren’t energy intensive. The price increases likely to result from AB32 are actually smaller than increases that result from other things that change for small businesses year to year anyway, like the price of gasoline and natural gas for heating. Both of those fluctuate by a much higher percentage, regularly.”

On the other hand, price sensitive businesses and companies in energy intensive industries could feel a pinch, The Brattle Group projected. Opponents to AB32, and those who supported proposition 23 in California continuously express concerns that if the costs of energy and goods in California go up, but they do not go up at the same rates elsewhere, that will drive some companies to take their jobs and dollars out-of-state.

Weiss, based on his firm’s extensive research believes, “The types of companies that would be tempted to [move] are incredibly energy intensive, or price sensitive. If electricity prices going up even a few points would be a major increase in costs to them, they might want to move… Energy intensive industries include things like aluminum smelters, and pulp and paper companies.” A lot of these would not be found in California now, Weiss pointed out, because energy prices there have been high historically compared to other parts of the country.

Forbes reported that the defeat of proposition 23 comprised a win for the solar industry and that the state could expect to see more solar manufacturing jobs, soon. The Houston Chronicle reported that fuel prices in California could rise ahead of the Jan. 1, 2012, when oil refineries and power plants there will have to limit their greenhouse gas emissions.

Given California’s history of spurring new industry and innovation, AB32 proponents hope that the environmentally progressive law will not just abate pollution, but actually create demand for a new set of goods and services, and along with it plenty of local cleantech jobs and new businesses.