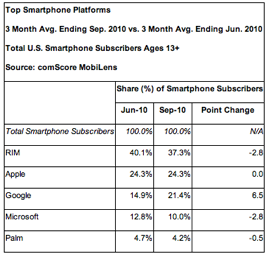 comScore has released its monthly smartphone mobile report today and like last month’s data, Android is continuing its assault on Apple and RIM’s share of users. The data, which measured smartphone usage from June until September of this year, showed that 58.7 million people in the U.S. owned smartphones during period, up 15 percent from the preceding three month period ending in June. comScore says that the Android platform now reaches more than 1 in 5 U.S. smartphone subscribers.

Mobile phone owners continue to use their phones for more than just texting or calling contact. Browsers were used by 35.1 percent of U.S. mobile subscribers (up 2.2 percentage points) and users who used downloaded applications comprised 33.1 percent of the mobile audience, representing an increase of 2.5 percent. And 23.2 percent of users visited social networking sites or blogs, an increase of 1.8 percent. The percentage of users playing games and and listening to music also increased slightly.

Android’s steady ascent as a go-to smartphone platform seems to be an accepted fact by now and the surprise at data showing this trend is beginning to wear off. Everyday there’s a new study or report showing that Android is eating away at the share that RIM and Apple held in the smartphone market. Yesterday, Nielsen data indicated that for the past six months, in Android devices were the most popular choice for new smartphone purchases. On Monday, Canalys reported that total shipments of Android phones in the U.S. during the third quarter were nearly twice as large as iPhone shipments.