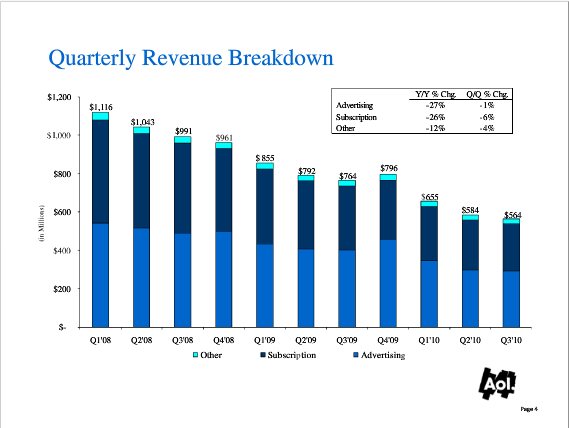 Our new corporate overlords (that would be AOL) have just released their Q3 earnings report, and it’s a mixed bag.

Total revenues for the quarter were down 26 percent, from $763.9 million to $563.5 million, in the previous year. This slightly tops Wall Street expectations of $557 million.

Profit, meanwhile, surged thanks to cost-cutting and the gains on the sales of ICQ and its Kayak investment. Net income increased to $171.6 million, or $1.60 per share, from $74.0 million or $0.70 per share last year.

(We reported on AOL’s Q2 2010 earnings here if you would like to compare).

AOL says it spent $97 million on, well, us, 5Min Media and Thing Labs, and that it could spend up to $23 million more on earnouts/retention bonuses over the next three years.

A couple of days ago, the company announced that it sold buildings and land on its Dulles campus, netting it $144.5 million in cash. Below are the earnings slides for the quarter.